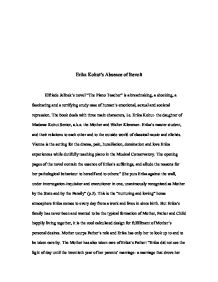 Erika Kohut's Absence of Revolt Elfriede Jelinek's novel "The Piano Teacher" is a breathtaking, a shocking, a fascinating and a terrifying study case of human's emotional, sexual and societal repression. The book deals with three main characters, i.e. Erika Kohut- the daughter of Madame Kohut Senior, a.k.a. the Mother and Walter Klemmer- Erika's master student, and their relations to each other and to the outside world of classical music and clich�s. Vienna is the setting for the drama, pain, humiliation, domination and love Erika experiences while dutifully teaching piano in the Musical Conservatory. The opening pages of the novel contain the essence of Erika's sufferings, and allude the reasons for her pathological behaviour to herself and to others:" She puts Erika against the wall, under interrogation-inquisitor and executioner in one, unanimously recognized as Mother by the State and by the Family" (p.3). This is the "nurturing and loving" home atmosphere Erika comes to every day from a work and lives in since birth. But Erika's family has never been and wanted to be the typical formation of Mother, Father and Child happily living together, it is the cool calculated design for fulfillment of Mother's personal desires. Mother usurps Father's role and Erika has only her to look up to and to be taken care by. ...read more.

Her surroundings are filled with the sterile air of classical music and Viennese adoration for performers, whose competitiveness with each other often borders brutality, and no one else but her old mother. The mother-daughter relationship is painful, deep and distressing not bearing any happiness or fulfilment. Erika has also been deprived from the ability to communicate her desires to other people but to her mother, who has molded her, and thus knows best what is allowed to bring Erika pleasure and what not, and who does not perceive this as Erika's disadvantage. Erika Kohut experiences no pleasures, her feelings and desires have been suppressed ever since the first unconscious attempt her being has expressed to show them and her creative, emotional and sexual energy were carefully channelled by her mother into the majestic realm of the institutionalised Viennese cult for classical music. The mother resumes all aspects of Erika's possible wishes and needs; she bases their relationship on a distorted understanding of love and duty. The closed cycle of pain and inflicting pain in Erika's attitude to her mother and herself is not even broken with the appearance of the young lover-rapist Walter Klemmer. Erika has so deeply internalized the feeling of being a victim of her mother and an all powerful perpetrator of humiliation to her young piano students in the Conservatory that she cannot and will not break out of this vicious circle. ...read more.

Erika Kohut is the product of her mother's design closely intertwined with the doubtful moral principles of the society and the world of classical music1. Erika does not even perceive love as the driving force to escape the well guarded world of her mother and stand on her own. And love has no romantic or idealized meaning either for Klemmer or for Erika. He needs her to practice his sexual desires and to reinforce the oldest power structure of domination-man over woman. Erika's rejection to play by his rules and simultaneously not admitting the simplicity of her desires end in her brutal rape, which she herself has depicted in her letter to Klemmer. She is dead for a long time now, maybe even since birth, she lives the life her mother wants her to have and there is no one else who really cares about her or wants her as much as her mother. Erika does not revolt against her despotic mother because her present life is determined by her thoughts and inactions in the past, in the long gone unhappy and controlled childhood. The end of the book reinforces Erika's inability to push the limits of her barren existence and the cycle of interdependence is closed: "Erika knows the direction she has to take. She heads home, gradually quickening her step." (p. ...read more.