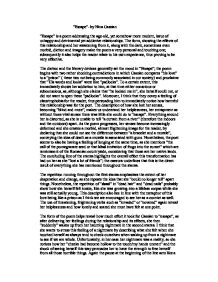 "Escape"- by Nina Cassian "Escape" is a poem addressing the age-old, yet somehow more modern, issue of unhappy and detrimental yet addictive relationships. The form, showing the effects of this relationship and her awakening from it, along with the dark, sometimes even morbid, diction and imagery make the poem a very personal and touching one; subsequently it also helps the reader relate to his own experience, thus proving to be very effective. The diction and the literary devices generally set the mood in "Escape"; the poem begins with two rather shocking contradictions in which Cassian compares "his love" to a "prison" ( these two not being commonly associated in our society) and proclaims that "His words and looks" were like "padlocks". To a certain extent, this immediately shows her addiction to him, at that time either conscious or subconscious, as, although she claims that "he locked me in", she herself could not, or did not want to open these "padlocks". Moreover, I think that they covey a feeling of claustrophobia for the reader, thus persuading him to immediately notice how harmful this relationship was for the poet. ...read more.

The repetition running throughout the first stanza emphasizes the extent of her desperation and change, as she repeats the idea that she "could no longer tell" apart things. Nonetheless, the repetition of "dead" in "dead hair" and "dead nails" probably show how she herself felt inside, like she was growing into a lifeless corpse while she was still actually young. This description also lies in line with the metaphor of this love being like a prison as I think we are encouraged to see her as a convict as well. The use of threatening, frightening verbs such as "invaded" or "covered" again reveal her helplessness and how lonely and scared she must have felt at one point. The form of the poem helps reveal how much effort it took for Cassian to "escape", as after delivering her feelings during the relationship and its effects, she then "suddenly" wakes up from her haunting nightmare in the second stanza. I think that she wants to stress this feeling of a nightmare by describing what she felt when she touched herself as always tend to check ourselves when waking up from a nightmare to see if we are whole. ...read more.

I think that this short sentence highlights the ambivalence of her feelings, as on one hand she must have been relieved to be able to free herself so easily, while on the other hand she may have felt some disappointment, as she was probably expecting him to care, to not simply let her go. The repetition of "No one" in the last 5 lines highlights her loneliness and desperation as nobody was there on either sides, her lover not caring enough to ask her to stay or "to raise the alarm" and her friends not "greet(ing)" her or supporting her once she got out of the relationship. The use of "Not a soul" again brings into question the idea of death which is expressed in the first stanza; she was probably hoping that a soul, or somebody, would revive her from being so lifeless and full of "dead" things but unfortunately this soul is absent. The idea that she ends the poem with only "No one" is an extremely poignant conclusion, highlighting the peak of her lonesomeness, towards which the second stanza was building. In my opinion, this creates a heartbreaking mood, making us feel even more sympathy for the poet. ...read more.