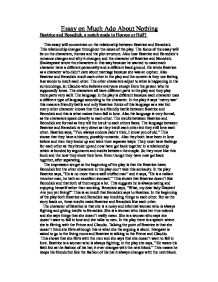 Essay on Much Ado About Nothing

After Beatrice is married she never speaks in the play again. I think that this is good and bad because she will not insult or argue with Benedick. But this is not very good as well because Benedick fell in love with a woman who talked a lot and she never talks after the marriage so this may be a problem. Beatrice stops talking in the rest of the play. The audience in Shakespeare's time would have thought that this was good because a woman should be quiet, not loud. But she may be doing this only in the play. But this may be a set back because she talked a lot before and this may be something that Benedick likes or doesn't like; so she will have to adjust herself to if Benedick likes Beatrice talking a lot or not. But Beatrice was a loud mouth and this may affect the way Benedick loves her because Benedick liked a loud woman and this is one of the reasons he married her. Also this may not affect their relationship because Benedick may like Beatrice this way after marriage; so she is not flirting with other men like she used to do before her marriage. Also so there are not as may arguments as there was before marriage. I think Beatrice has realised her responsibilities as a wife and that is the reason why she doesn't speak in the play again. ...read more.