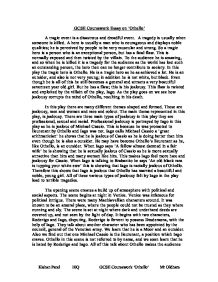 GCSE Coursework Essay on 'Othello' A tragic event is a disastrous and dreadful event. A tragedy is usually when someone is killed. A hero is usually a man who is courageous and displays noble qualities; he is perceived by people to be very muscular and strong. So a tragic hero is a person who is an exceptional person, but has a fatal flaw. This is normally exposed and then twisted by the villain. To the audience he is amazing, and so when he is killed it is a tragedy for the audience as the world has lost such an outstanding person, the hero then can no longer contribute to society. In this play the tragic hero is Othello. He is a tragic hero as he as achieved a lot. He is an outsider, and also is not very young; in addition he is not white, but black. Even though he is all of this he still becomes a general and attracts a very beautiful seventeen year old girl. But he has a flaw; this is his jealousy. This flaw is twisted and exploited by the villain of the play, Iago. As the play goes on we see how jealousy corrupts the mind of Othello, resulting in his death. In this play there are many different themes shaped and formed. These are jealousy, men and women and race and colour. The main theme represented in this play, is jealousy. There are three main types of jealousy in this play they are professional, sexual and racial. Professional jealousy is portrayed by Iago in this play as he is jealous of Michael Cassio. This is because he was promoted to lieutenant by Othello and Iago was not. Iago calls Michael Cassio a 'great arithmetician' he shows that he is jealous of Cassio as he is doing better than him even though he is also a outsider. ...read more.

He likes people, who are self-serving, and people who do evil deeds for money, people who are untrustworthy and who pretend to be honest. His speeches in these scenes are energetic and shocking to many audiences, they are full of egotistical disgust. Furthermore Iago has an underhand way of being absent when actions which he has instigated come to head. Iago is a compelling and sophisticated villain. In this play there are two main scenes where Iago puts his Machiavellian plans in to operation. Iago's plans are malicious; he puts his plans into action in act 2 scene 3, and in act 3 scene 3. In act 2 scene 3 all of Iago's tactics and ideas become reality. Upon arrival in Cyprus Iago persuades Cassio to have a drink by saying 'come, lieutenant, I have a stoup of wine.' Cassio keeps on refusing Iago's offers, as he has 'very poor and unhappy brains for drinking.' But Cassio is not able to resist it, and takes some wine, causing him to become 'full of quarrel and offence.' Iago perceives this as his chance to instigate his plan. Continuing to manipulate Roderigo effortlessly, he makes him start off a quarrel and a brawl with Cassio. Cassio gets wound up by Roderigo, as Roderigo gives witty remarks like 'beat me?' These comments from Roderigo and the fact that he is drunk cause Cassio to get aggravated, and therefore fight. Othello gets alerted by the brawl, and finds Montano and Cassio fighting. Montano is hurt, 'zounds I bleed still.' Othello asks 'honest Iago' to find out what happened. This is dramatic irony as Othello thinks that Iago is an honest person, whereas the audience knows that he is not, that he is crude and evil. This puts the audience in the position of knowing more than the characters, increasing tension. Othello dismisses Cassio from his position, and he is demoted, just as Iago wanted. ...read more.

He is able to manipulate, and twist people's feelings to his own advantage. He is brilliant at stage managing events, and is capable of hoodwinking others to believe he is honest. When Iago speaks in his soliloquies he is boastful and dismissive. Iago is a very untrustworthy character, as we have seen from how he has fooled everyone to trust him. Iago is a complex character, only himself and the audience knows what he is really like. In this play we see how Iago is able to put his skills of manipulation into act. Many believe he may have a homosexual side and tries to replace Desdemona, but this is only some views as his relationship with Othello is very complicated. Iago is highly intellectual socially. In this play he is the bringer off death and pain upon many characters, he is like the grim reaper. Iago is partly responsible for bringing death to Othello, but it is not all his fault. It is true that he used his skills to manipulate people, and his ability to 'poison' and corrupt people's minds to bring Othello's downfall, but it is also the faults of the people he manipulated, for being weak minded. Roderigo, who was firstly manipulated, followed Iago as his drive and passion to possess Desdemona got in the way. Cassio's flaw was that he only became manipulated as he believed Iago was his true friend, and that he was there to help him, he was also too trusting. Desdemona also had a fatal flaw, which was that she could be deceitful; also she loved and trusted Othello to a great extent. Finally Iago's greatest achievement was convincing and manipulating Othello. Othello has the most significant fatal flaw; he had a high amount of jealousy. Iago was able to exploit all of these weaknesses. But the biggest was Othello's which all lead to the catastrophic deaths of Othello and his Desdemona. ?? ?? ?? ?? Kishan Patel 10Q GCSE Coursework 'Othello' Mr Oldham ...read more.