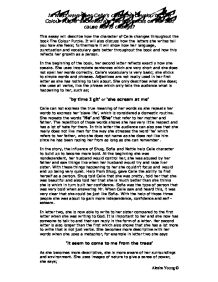 Essay on The Colour Purple

In what ways does Celie's character develop in 'The Colour Purple' and what are the influences on her that cause her to change? This essay will describe how the character of Celie changes throughout the book The Colour Purple. It will also discuss how the letters she writes tell you how she feels; furthermore it will show how her language, punctuation and vocabulary gets better throughout the book and how this reflects her growth as a person. In the beginning of the book, her second letter reflects exactly how she speaks. She uses incomplete sentences which are very short and she does not spell her words correctly. Celie's vocabulary is very basic; she sticks to simple words and phrases. Adjectives are not really used in her first letter as she has nothing to talk about. She only describes what she does; she uses all verbs, like the phrase which only tells the audience what is happening to her, such as; 'by time I git' or 'she scream at me' Celie can not express the true meaning of her words so she repeats her words to express her 'slave life', which is considered a domestic routine. ...read more.

It is important to her and she now has someone to talk to and that can reply in the form of a letter. Her second letter is also longer than the first which also shows that she has a lot more to write that is not just verbs. She becomes more descriptive with her words when she uses a metaphor, for example in letter two she says 'it seem to come to me from the trees' As she becomes more descriptive, she is more aware of her surroundings and environment. She uses images of nature to give a sense of power, she says; 'A dust devil flew up on the porch between us, fill my mouth with dirt. The dirt say, Anything you do to me, already done to you.' With this it shows that she knows who she is, where she is and what she means to herself which is expressed more in this letter. She's got a sense of who she is and she makes it known by saying to her husband; 'I'm pore, I'm black, I may be ugly and can't cook, a voice say to everything listening. ...read more.

and herself. The previous letters would tell the audience who to and what she said with very little or no meaning to it. With this letter she wants to express herself to the whole world of what she is aware, which is the environment and everything and everyone else. By the end of the book, Celie has gained a lot of confidence and personality. She has also gained the knowledge of how to read and write with the kind help of Nettie, her sister. The letters she wrote with a lot of description told the audience that she is now independent. At the beginning she found it hard to communicate but eventually found her own two feet to stand on. Celie eventually reconciled with her husband in the end as he finds out that she is more of a person now than ever and she isn't afraid to show it. He came to the conclusion that he needed to start treating his wife properly without the abuse and abusive language. In conclusion, throughout the whole book Celie grew up and became someone with meaning. ?? ?? ?? ?? Alesha Young (c) ...read more.