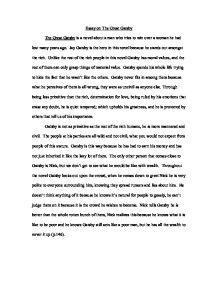 Essay on The Great Gatsby

Essay on The Great Gatsby The Great Gatsby is a novel about a man who tries to win over a woman he had lost many years ago. Jay Gatsby is the hero in this novel because he stands out amongst the rich. Unlike the rest of the rich people in this novel Gatsby has moral values, and the rest of them can only grasp things of material value. Gatsby spends his whole life trying to hide the fact that he wasn't like the others. Gatsby never fits in among them because what he perceives of them is all wrong, they were as uncivil as anyone else. Through being less primitive than the rich, determination for love, being ruled by his emotions that erase any doubt, he is quiet tempered; which upholds his greatness, and he is protected by others that tell us of his importance. Gatsby is not as primitive as the rest of the rich humans, he is more mannered and civil. The people at his parties are all wild and not civil, what you would not expect from people of this stature. ...read more.

Gatsby was in search of the American Dream, the only thing he had left to clench in it was a loving family. Daisy was the flaw in the American Dream. Gatsby wanted to marry out of love and not out of wealth like all the others. He knew he had to live the American Dream to wed her. He knew she loved wealth more than anything else, he had a collection of clippings of almost everything she had done over the years (p.90). Gatsby could have anyone else in the world with old money, but he only wanted Daisy, therefore she was his one true love. Gatsby was ruled by his emotions, which causes him to doubt any second thoughts he had made about Daisy. Gatsby knew she could never love him like he loved her, but it did not stop him. Gatsby kept on having parties in hope that she would come to them, when she never did he thought it coincidence and not fate, which it was. ...read more.

Gatsby is always protected by others in the novel which tells us that he is an important person. He is protected by people related to his job and anyone who knew him. He always wants Nick to come with him on things he is unsure of, like when meeting daisy for the first time in eight years (p.83). He needs others to fulfill his confidence in himself, it is how he got as far he did in the novel (money wise). He only meets new people through association with someone else in the novel, he meets Nick through Jordan and Daisy through Nick. He is like this because he expects things to come to him like they have in the past like his job from Meyer Wolfshiem. James Gatsby is the hero in the novel through: his modern acts, determination for love, his conquering emotions, his quiet temperament, and his protected state. A hero is someone unlike the others and Gatsby fills this character perfectly in the novel. Therefore Gatsby is the character and no one else should even be considered for his place in The Great Gatsby. ...read more.