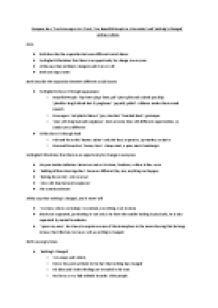 Essay Plan. Compare how Two Scavengers In A Truck, Two Beautiful People In A Mercedes and Nothings Changed portray culture.

Poor and Powerless: ?bunny chow?- cheap meat, a poor man?s hamburger Ferlinghetti illustrates that there is an opportunity for change in everyone 1. No punctuation indicates classes are not set in stone, freedom, written in free verse 2. ?Holding all four close together?- however different they are, anything can happen. 3. ?looking down into?- role reversal 4. ?Also with long hair and sunglasses? 5. The American dream Afrika says that nothing?s changed, and it never will 1. ?We know where we belong?- in contrast, everything is set in stone 2. ...read more.

4. He shows a very bad attitude towards white people. 5. The tone can be seen as that of a resigned way, as if he knows that it almost too much to hope that things can change. 1. ?Two Scavengers In A Truck, Two Beautiful People In A Mercedes? 1. Loud angry tone to protest about the failure of democracy 2. Can also be seen as a sombre, muted tone, to express sadness that a gap remains between rich and poor. 3. Comparison in detail has been done between the two garbage men and the cool couples. ...read more.