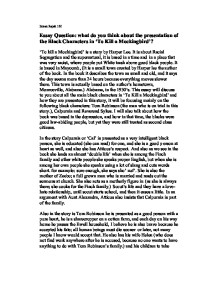 Essay Question: what do you think about the presentation of the Black Characters in 'To Kill a Mockingbird'?

Imran Rajah 10I Essay Question: what do you think about the presentation of the Black Characters in 'To Kill a Mockingbird'? 'To kill a Mockingbird' is a story by Harper Lee. It is about Racial Segregation and the supernatural, it is based in a time and in a place that was very racist, where people put White trash above good black people. It is based in Maycomb, (It is a small town created by Harper lee the author of the book. In the book it describes the town as small and old, and it says the day seems more than 24 hours because everything moves slower there. This town is actually based on the author's hometown, Monroeville, Alabama.) Alabama, in the 1930's. This essay will discuss to you about all the main black characters in 'To Kill a Mockingbird' and how they are presented in this story, it will be focusing mainly on the following black characters: Tom Robinson (the man who is on trial in this story.), Calpurnia and Reverend Sykes. ...read more.

In an argument with Aunt Alexandra, Atticus also insists that Calpurnia is part of the family. Also in the story is Tom Robinson he is presented as a good person with a pure heart, he is a sharecropper on a cotton farm, and each day on his way home he passes the Ewell household, I believe he is also brave because he accepted his fate; all human beings must die sooner or later, not many people I know would accept that. He also has his wife Helen (who does not find work anywhere after he is accused, because no one wants to have anything to do with Tom Robinson's family.) and his children to take care of. He is accused of beating and raping Mayella Ewell, the daughter of Bob Ewell, Atticus defends him, even though he knows he will lose because Tom is black, but he also knows that Tom is innocent and that he must defend him, because if he doesn't, no one else will. Tom was only trying to help Mayella because no one else would, and he felt sorry for her, but she made ...read more.

When they get to the courthouse, Reverend Sykes takes them up to the second floor to sit with him because the first floor is full. In conclusion I think that Harper Lee shapes all her black characters to the way most of us wish to be, heroes in their own way, yet she still makes them believable, unlike the fairytales this is based in a real life situation, but she does not make all her characters like that, for example Lula, who is always picking on people and being mean, which shows a great diversity in her characters, and that is what separates this book from a fairytale or some little fable. Before I finish I would roughly like to tell you what the Great Depression was: the Great Depression was in America when the stock market crashed and it lasted for a period of about 10 years, beginning in October 1929 during which many people lost their jobs and many companies went out of business throughout the World. People who were desperate took their families on the road to look for work. Today people who lived through the Great depression still remember the daily hardships. Word count: 996 ...read more.