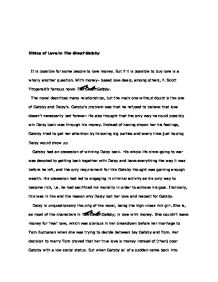 Ethics of Love in The Great Gatsby

Ethics of Love in The Great Gatsby It is possible for some people to love money. But if it is possible to buy love is a wholly another question. With money- based love deals, among others, F. Scott Fitzgerald's famous novel The Great Gatsby. The novel describes many relationships, but the main one without doubt is the one of Gatsby and Daisy's. Gatsby's problem was that he refused to believe that love doesn't necessarily last forever. He also thought that the only way he could possibly win Daisy back was through his money. Instead of having shown her his feelings, Gatsby tried to get her attention by throwing big parties and every time just hoping Daisy would show up. ...read more.

Her decision to marry Tom proved that her true love is money instead of (then) poor Gatsby with a low social status. But when Gatsby all of a sudden came back into Daisy's life, having made a huge amount of money and reached the upper class, she thought her decision to marry Tom had been a mistake, since she could have married even richer man than him. That man had missed her for five long years, which Daisy had some difficulties to understand. She was an impatient character and couldn't believe that anyone could wait for anything as long as five years. Tom and Daisy were both young, good-looking, wealthy high-class people. They did have love in their marriage - love of money. ...read more.

(Myrtle on George.) Anyway Myrtle's love for Tom was doomed for failure from the very beginning due to her standing in a lower class than Tom. In my opinion, the only genuine love described in The Great Gatsby is George Wilson's love for her wife Myrtle. He had money enough to get along, but it didn't matter so much for him. He was happy to live with her wife in the valley of ashes, but sadly didn't get the response for his love he would have deserved. None of the relationships described in the novel represent true love. Marriages are artificial or done on the spur of the moment, and "love" is usually love of money or idealisation of high social status. And how could any relationship be true and binding, if values are corrupt or feelings aren't mutual? Love indeed is blind, even corrupt love. ...read more.