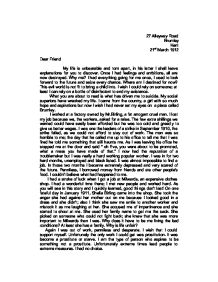 27 Alleyway Road Brumley Kent 21st March 1912 Dear Friend My life is unbearable and torn apart, in his letter I shall leave explanations for you to discover. Once I had feelings and ambitions, all are now destroyed. Why me? I had everything going for me once, I used to look forward to the future and seize every chance. Where am I destined for now? This evil world is not fit to bring a child into. I wish I could rely on someone; at least I can rely on a bottle of disinfectant to end my existence. What you are about to read is what has driven me to suicide. My social superiors have wrecked my life. I came from the country, a girl with so much hope and aspirations but now I wish I had never set my eyes on a place called Brumley. I worked at a factory owned by Mr.Birling, a fat arrogant cruel man. I lost my job because we, the workers, asked for a raise. The few extra shillings we wanted could have easily been afforded but he was too cold and greedy to give us better wages. I was one the leaders of a strike in September 1910, the strike failed, as we could not afford to stay out of work. ...read more.

It was become a prostitute or starve. I am the type of person who aspires to be something not a prostitute. Unfortunately extreme times lead people to extreme measures. I had no choice. I was at the Palace Bar, the place I used to pick up men, Joe Meggerty, an awful man who chased prostitutes, was manhandling me. A good looking, gentleman named Gerald Croft rescued me. Gerald was nice too me. He made me his mistress; it was an affair because I knew he had someone else. I loved him but he was just using me for sex. At least I lived in total luxury for six months. He ended it in September 1911, I was an inconvenience. I was absolutely heart broken. I felt so used and abandoned. He gave me money to help me for a while; Gerald was the type of man who thought money solved everything. I enjoyed the affair so much that I went off to the seaside and pretended that the affair was still on. I had been expecting it to end any way, as he did not have the same feeling I had for him. Good things never last for me. I lived on the money he gave me until November 1911. ...read more.

Birling, I thought I should have the right to that name but she thought that I was being rude towards her. Perhaps she did not want the name Birling being brought into disrepute. She took me to a back room and I explained to her that the father of the child was giving me money but the money was stolen and I couldn't take it anymore. She said that some one as low as me would not have airs and graces like that; she thought that poor people did not have feelings and morals, that we were animals. I deserved that bit of help she could have given me, especially as it would have supported her grandchild. There is now nothing I can do; I'm the lowest of the low. I have gone without food for days. Why did they have to reject my plea for help? How can Mrs. Birling be so cold hearted? Why do I have I to live this worthless existence, trapped in misfortune? I am now in total despair. I have found out that this world is cruel and unfair. This town, this world is not the type of place that I would like to bring a child up in. I must end this for both of us. I am a victim of others' lack of morals. I know I'll go to heaven because I have served my time in hell. Yours Eva Smith ...read more.