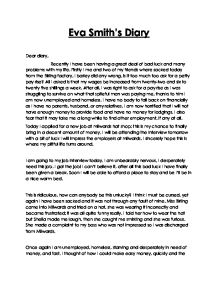 Eva Smith's Diary Dear diary, Recently I have been having a great deal of bad luck and many problems with my life. Firstly I me and two of my friends where sacked today from the Birling factory, I barley did any wrong, is it too much too ask for a petty pay rise? All I asked is that my wages be increased from twenty-two and six to twenty five shillings a week. After all, I was right to ask for a pay rise as I was struggling to survive on what that spiteful man was paying me, thanks to him I am now unemployed and homeless. I have no body to fall back on financially as I have no parents, husband, or any relatives. I am now horrified that I will not have enough money to provide food and have no money for lodgings. I also fear that it may take me a long while to find other employment, if any at all. ...read more.

Not so long after I sat down, a large, foul-mouthed man stumbled over and tried to sit on my lap, he was extraordinarily squiffy. Just as I was about to surrender to this man, a strong gentleman threw him off of me, I thought that this was extremely considerate of him so I invited him to sit down with me. We got discussing things and he soon told me that his name was Gerald. We talked for a while, then he invited me to come back to his place but I refused. I told him that I would head back to my place, but obviously I did not have a house, or even anywhere to claim was mine. So being the kind, generous chap he was he insisted that he would not leave me alone until I was home safe, so he called a cabbie to take me home, when the cabbie stopped I had to tell him the truth. ...read more.

Turns out that it wasn't just a feeling, I am pregnant! How could I of let this happen, I suppose it is partially my fault, but I barely know that stupid drunk imbecile. I have decided to keep the baby, it is going to be a struggle financially and it's going to be difficult to raise a child on my own, so I will have to ask for financial backing. I heard that Mrs Birling ran a charity committee, offering money for people in need, so I reached out to her for help. I told her my name was Birling, she took this very offensively and refused me any support. I now don't know what to do; I am sick and tired of being on my own, I am cold lonely and ever so hungry, I am expecting a child and have no money at all to raise it with, it would be cruel to bring a child into this bitter life I have, when even I myself can't go on like this. ...read more.