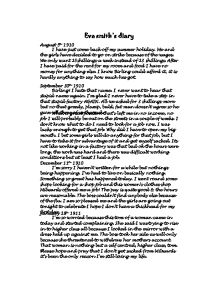 Eva smith's diary August 5th 1910 I have just come back off my summer holiday. Me and the girls have decided to go on strike because of the wages. We only want 25shillings a week instead of 23 shillings. After I have paid for the rent for my room and food I have no money for anything else. I know Birling could afford it, it is hardly anything to say how much hes got. September 30th 1910 Birling! I hate that name. I never want to hear that stupid name again. I'm glad I never have to take a step in that stupid factory AGAIN. All we asked for 3 shillings more but no that greedy, plump, bald, fat man doesn't agree so he gave all three of us the sack. What a great position that's left me in no income, no job I will probably be out on the streets in a couple of weeks. I don't know what to do I need to look for a job now. I was lucky enough to get that job. Why did I have to open my big mouth. I bet some girls will do anything for that job, but I have to take it for advantage of it and get myself sacked. Its not like working in a factory was that bad ok the hours were long, the work was hard and there was difficult working conditions but at least I had a job. ...read more.

march 11th 1911 I met this man called Gerald. He is so kind, so Georges he's the kind I would like to marry. This is the good part he asked me if I wanted to meet up in 2 days and of course I said yes so I'm going to get myself all doled up in a couple of days to meet him. I'm so excited. There's something a bit fishy about him though! March 13th 1911] I meet up with Gerald he has the softest touch, He's not like the average man he is gentle and not forceful. We are now a couple now, he said we will be secret lovers. I don't know what he means by this I still think there's something strange about him but I can't explain it. He doesn't show me around to all his mates like the others he keeps me reserved. Who cares, we are together now and that's all that matters. I'm going to see him on Thursday hope it goes well! September 4th 1911 I knew there was something going on with that Gerald. He was too nice to me letting me stay in a house of his and giving all this money. It only turns out that he has a fianc� back home. That two timing little get around he's got to pay for this I hope his fianc� finds out about us. ...read more.

In a way his dad deserves it, it's only Mr Birling the git who gave me the sack in the first place. Even though it is Mr Birling it is still wrong to steel money. And he has got me pregnant. I'm not sure what too do I don't really have any one to turn too I suppose I can go to the brumley women's committee. March 15th 1912 I went to the Women's committee today. There was this right tom who wouldn't give me advice. I was a bit scared at first so I went in telling them a fake story and calling myself Mrs Birling. This woman went mad saying that she was Mrs Birling and that I can't possible be her. She wouldn't give me help at all .When I told her the truth she just said I was not telling the truth and she wasn't going to listen. I would like to thank her because she is the reason why I am doing this to myself and its Erics fault and Gerald's and that women who got me sacked from milwards and all the way back to September last year when MR Birling sacked me. I hate all the Birling's and I'm glad I'm not called Mrs Birling. I Guess This is Good Bye... ...read more.