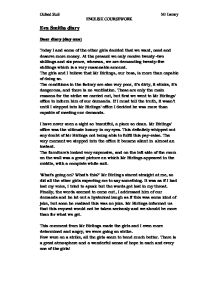 Today I and some of the other girls decided that we want, need and deserve more money. At the present we only receive twenty-two shillings and six pence, whereas, we are demanding twenty-five shillings which is a very reasonable amount.

The girls and I believe that Mr Birlings, our boss, is more than capable of doing so.

The conditions in the factory are also very poor, it’s dirty, it stinks, it’s dangerous, and there is no ventilation. These are only the main reasons for the strike we carried out, but first we went to Mr Birlings’ office to inform him of our demands. If I must tell the truth, it wasn’t until I stepped into Mr Birlings’ office I decided he was more than capable of meeting our demands.

I have never seen a sight so beautiful, a place so clean. Mr Birlings’ office was the ultimate luxury in my eyes. This definitely whipped out any doubt of Mr Birlings not being able to fulfil this pay-raise. The very moment we stepped into the office it became silent in almost an instant.

The furniture’s looked very expensive, and on the left side of the room on the wall was a great picture on which Mr Birlings appeared in the middle, with a complete white suit.

‘What’s going on? What’s this?’ Mr Birlings stared straight at me, so did all the other girls expecting me to say something. It was as if I had lost my voice, I tried to speak but the words got lost in my throat. Finally, the words seemed to come out, I addressed him of our demands and he let out a hysterical laugh as if this was some kind of joke, but soon he realised this was no joke. Mr Birlings informed us that this request would not be taken seriously and we should be more than for what we get.

This comment from Mr Birlings made the girls and I even more determined and angry, we were going on strike.

Now were on a strike, all the girls seem to bond much better. There is a great atmosphere and a wonderful sense of hope in each and every one of the girls!

The strike did not turn out to be a great success; in fact it was a more of a great defeat.

After six weeks the strike, many of the girls, including myself, had experienced starvation. We needed money, and with Mr Birlings looking more firm by the day, it did not add to our confidence.

When I went back to work this morning, I sensed a feeling of disappointment in the girls’ eyes. I feel guilty for what has happened these past six weeks. It was I who made them starve, it was I who promised victory it was I who started what became a terrible mistake. Mr Birlings called me to his office, saying he wanted to speak to me. As I was the ring leader, I was expecting the worst. I sat in his office knowing what was going to come, I was being told to clear out.

I tried to be courageous think of the other opportunities out there, but deep down inside I felt totally bewildered. I knew I would not be able to survive without money.

The past few weeks had been terrible, a complete nightmare, but now I am ready and desperate to start a new life.

I have changed my name to Daisy Renton and earned myself a good job at a shop called Milwards, which I am really excited about. The work conditions a really good, unlike the factory.

Having started work I feel both happy, and enthusiastic but also very lucky to be granted this job. So I decided not to take it for granted, I will be as kind as possible, to as many as possible.

I was employed as a cloth’s assistance, which is a quite easy job.

Today, a young girl came into the shop, who clearly an important and respected costumer. The girl asked for a dress which I got for her. I could not help noticing the dressed in the shop were very elegant and also very expensive. I knew I would never be able to get anything this pretty or expensive.

I came with a handful of dresses, and posed in them for her to choose the one she liked best. I sensed a look of amazement and satisfactory.

Then, when she tried on the dress, she had a disappointed look in her face. I tried to smile as pleasantly as possible, but soon the disappointment was changed into anger and hatred.

Now I have been sacked from Milwards, because the young girl had complained about me. As an important and respected costumer, I had to go.

What am I going to do now, how am I going to get the financial support I need without a job. I feel completely disorientated, what is the point of living?