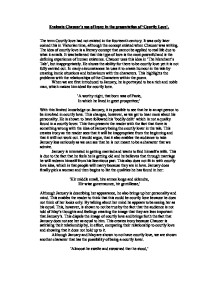 Evaluate Chaucer's use of irony in the presentation of 'Courtly Love'

Evaluate Chaucer's use of irony in the presentation of 'Courtly Love'. The term Courtly love had not existed in the fourteenth century. It was only later coined this in Victorian time, although the concept existed when Chaucer was writing. The idea of courtly love is a literary concept that cannot be applied to real life due to what it entails. It was believed that this type of love is the most powerful and is the defining experience of human existence. Chaucer uses this idea in 'The Merchant's Tale', but inappropriately. He shows the ability for there to be courtly love yet it is not fully carried out. In many circumstances he uses it to create humour in the tale by creating ironic situations and behaviours with the characters. This highlights the problems with the relationships of the Characters within the poem. When we are first introduced to January, he is portrayed to be a rich and noble man, which makes him ideal for courtly love. 'A worthy night, that born was of Pavie, In which he lived in greet prosperitee;' With this limited knowledge on January, it is possible to see that he is an apt person to be involved in courtly love. ...read more.

Although January and May are shown to not have courtly love, we are shown another character that has the possibility of being a courtly lover. 'Almoost he swelte and swowned ther he stood,' The use of hyperbole highlights the idea of the character, Damien, being appropriate as a courtly lover for May. It is dramatic and are typical symptoms that lead to a form of typical courtly love and then brings the readers attention to the fact that we could be seeing the formation of a new, more apt, 'courtly love' relationship. The audience is then expecting Damien's next reaction to be one that follows up the feelings he has shown for May at the wedding feast. 'So brenneth that he dieth for desir,... But prively a penner gan he borwe,' Chaucer uses bathos here to add humour to the tale as it is a great anti-climax to the build up of courtly love. It creates irony as we see Damien saying that he would 'deith for desire', this makes the audience believe he will do something in the style of courtly love to show this. He does, however, only borrow a pen to show his love. ...read more.

Chaucer uses courtly love constantly throughout the tale as a theme that leads all the characters to act incorrectly and result in disasters or deception. Although the main characters appear to be courtly lovers, they prove to the reader that they are not by their actions. In the first instance we see a possibility between the knight January and May. This, however, was ruined by the behaviour that January had towards women as he does not see May as his equal in the relationship. We also see the inability of Damien to behave as the courtly lover as his actions lack the bravery required by a courtly lover. These constant incorrect courtly loves in the take creates irony as we see that love has affected their lives negatively in many circumstances. Characters appear foolish and also lose things such as inheritence or self respect by being involved in 'courtly love'. It also was not carried out properly by the characters, creating humour as we see them as being unable to be this typical type of lover. Courtly love is satirised in the tale by Chaucer to aide the parodying of his characters and enables the reader to see the humour in the tale on a serious subject. ...read more.