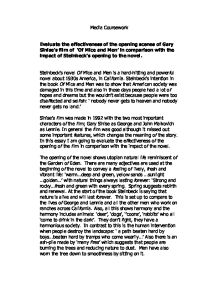 Evaluate the effectiveness of the opening scenes of Gary Sinise's film of 'Of Mice and Men' in comparison with the impact of Steinbeck's opening to the novel.

Media Coursework Evaluate the effectiveness of the opening scenes of Gary Sinise's film of 'Of Mice and Men' in comparison with the impact of Steinbeck's opening to the novel. Steinbeck's novel Of Mice and Men is a hard-hitting and powerful novel about 1930s America, in California. Steinbeck's intention in the book Of Mice and Men was to show that American society was damaged in this time and also in those days people had a lot of hopes and dreams but the wouldn't exist because people were too disaffected and selfish: ' nobody never gets to heaven and nobody never gets no land.' Sinise's film was made in 1992 with the two most important characters of the film; Gary Sinise as George and John Malkovich as Lennie. In general the film was good although it missed out some important features, which changes the meaning of the story. In this essay I am going to evaluate the effectiveness of the opening of the film in comparison with the impact of the novel. The opening of the novel shows utopian natural life reminiscent of the Garden of Eden. ...read more.

They come and they quit and go on and every damn one of 'ems got a little piece of land in his head.' This fits in with the whole novel because Steinbeck's shows us that George and Lennie are no different to all of the ranch workers of this time. The film opens in darkness. Sinister, orchestral music is heard with a piano refrain. The music brings out an atmosphere of tension and suspense. After a while the mise en scene starts to change slowly to reveal the light flashing past gaps behind the wooden panels. When it is still dark the soundtrack changes to the noises of a train moving. This carries on the feeling of suspense and unknown mystery. The viewer then becomes aware of a partially lit face staring intensely into space. This is emphasised by the lighting and colour (black and white). The soundtrack becomes louder as the camera focuses closer onto the face, since the face is only half-visible; we still have an air of mystery. This is different to the novel at the start of the story, where there is the description of a Garden of Eden style land. ...read more.

This is similar to the novel, but unlike the book we are still concerned about the incident that happened with the girl. It is important in the book that we don't hear about this incident until section 2. We don't judge Lennie and George in the same way as we might in the film. When they get to Soledad we the mise en scene changes to show lots of people in a town. This is where are George and Lennie are going to collect their work permits. At one point a mother and child walk past and there are many examples of working people coming and going. This is different to the novel and not match the way the book shows the disharmony of human beings. I think that the opening of the film was not as good as the opening of the novel because the novel shows how life in California is made and it also wants to surprise in terms of what is going to happen in the novel. Steinbeck wrote the novel to show that in the 1930s people were very selfish and that economics drove people to self-destruction. In my opinion the film does not show this and so is less effective. Ricky Taylor 11p ...read more.