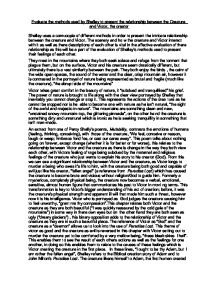 Evaluate the methods used by Shelley to present the relationship between the Creature and Victor, the creator Shelley uses a cornucopia of different methods in order to present the intricate relationship between the creature and Victor. The scenery and how the creature and Victor interact with it as well as there descriptions of each other is vital in the affective evaluation of there relationship as this will be a part of the evaluation of Shelley's methods used to present their feelings of each other. They meet in the mountains where they both seek solace and refuge from the torment that plague them, but on the surface, Victor and his creature seem drastically different, but ultimately there is a vast similarity between the pair. They both enjoy the birds, the calm of the wide open spaces, the sound of the water and the clear, crisp mountain air, however it is contrasted in the portrayal of nature being represented as brutal and fragile (much like the creature), "the abrupt side of the mountains" Victor takes great comfort in the beauty of nature, it "subdued and tranquillised" his grief. ...read more.

Formerly a mysterious, completely physical being, the creature now becomes a verbal, emotional, sensitive, almost human figure that communicates his past to Victor in moving terms. This transformation is key to Victor's bigger understanding of his act of creation; before, it was the creature's physical strength and apparent ill will that made him such a threat, however now it is his intelligence. Victor who is portrayed as God judges the creature causing him to feel unworthy, "grant me thy compassion".This chapter relates both Victor and the creature as they are both beautiful ("I was quickly reassured by the cold gale of the mountains") in some way in there own eyes but on the other hand they are both seen as ugly ("dreary glaciers") , this binary opposition adds to the relationship of Victor and the creature as they are in such a beautiful place. The reference of Victor as "God" and the creature as a "daemon" allows us to look into the use of Paradise Lost. ...read more.

For Victor, it is his guilt and the pain he suffers for bringing upon his family the suffering that comes from the loss of loved ones. William's death and the loss of Justine are indirectly Victor's fault. Through his selfish ambition, he chose to create and abandon his creature without any thought of the consequences. This is considered a crime against nature, and certainly not in keeping with Shelley's ideal parent/child relationship. For Victor nature is peaceful and beautiful, which his current life is not, this is ironic as this contrasts with the very unnatural creature that victor has created. By comparing Victor to God, the creature removes responsibility for his evil actions upon Victor, condoning him for his neglectful failure to provide a nourishing environment. The creature is driven to the calm of the mountains because of the cruelty of mankind. The creature is hideous, and he is rashly judged by his outward appearance rather than his inner beauty. Everywhere he goes he is met with violence and irrational behaviour based on his appearance. It is unfair and unjust, and the reader completely relates to and feels for this rejected "person", "How dare you sport thus with life". ...read more.

****
This is a good answer to a difficult question. The essay remains focused on the question and chooses to deal with setting and religion. The religious part of the question is an immense topic and explains why the writer became swamped. More careful structuring, more quotes, contextual information and language analysis would improve this essay.