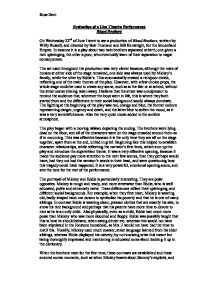 Evaluation of a Live Theatre Performance

Evaluation of a Live Theatre Performance Blood Brothers On Wednesday 22nd of June I went to see a production of Blood Brothers, written by Willy Russell, and directed by Bob Thomson and Bill Kenwright, for the Sunderland Empire. In essence it is a play about two twin brothers separated at birth; one given a rich upbringing, the other a poor, who eventually learn of their separation to tragic consequences. The set used throughout the production was very clever because, although the rows of houses at either side of the stage remained, one side was always used by Mickey's family, while the other by Eddie's. This automatically created a rich/poor divide, reflecting one of the main themes of the play. However, with a few choice props, the whole stage could be used to create any scene, such as at the fair or at school, without the street scenery being taken away. I believe that the street was omnipresent to remind the audience that, wherever the boys went in life, this is where they both started from and the difference in their social background would always dominate. The lighting at the beginning of the play was red, orange and blue, the former colours representing danger, urgency and death, and the latter blue to soften the mood, as it was a very sorrowful scene. ...read more.

whereas this would not have been stipulated in the Jonstone household, as Mrs. J would not have had the time to instil this. Vocally, Mickey used much coarser, street language learned from his elder siblings, whereas Eddie displayed his naivety, by not knowing what this meant but being thoroughly impressed and mentioning in educated tones about looking it up in the dictionary. When the brothers meet for the first time, these contrasts are established and these ensured comic moments, such as when Mickey boasts about Sammy's exploits, and Eddie offers him sweets. Mickey takes the sweets greedily, showing that he never is really given much, unless there is something wrong with it. Eddie, on the other hand, gives him the sweets straightaway, as he is used to always getting what he wants and not having to share. Furthermore, this scene is poignant because of the tension created. The audience wonders whether they will realise they are brothers, and there is dramatic irony, when Mrs Jonstone interrupts the scene. She appears flustered and anxious for Eddie to go home, leaving the audience sure that she knows who Eddie is. ...read more.

It left the audience feeling shocked at the way in which they died, although they knew they were going to die, and also slightly shaken, as the gunshot was very loud. However, I did not like the ending of the play because, it was less about them being brothers and superstition, but simply that Mickey thought Eddie was having an affair with Linda, which was most underwhelming. As a whole I thought the production was very good, well staged, and with an interesting balance of humour and tragedy. Its strengths were Linda Nolan, who delivered all of her songs tremendously while her acting showed amazing control and illustrated that every move she made was for a reason. I think that the play rather stagnated in the middle with Mickey's thoughts and feelings during the drugs scenes, as a lot of the gestures and body language was repeated and there should have been a humorous scene with Eddie injected into it somewhere. This was just a minor point though as the rest of the production was very good, and the singing added to it, which helped make the play and characters be more upbeat, when everything around them was dismal. ?? ?? ?? ?? Ross Dent ...read more.