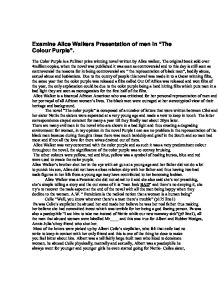 Examine Alice Walkers Presentation of men in "The Colour Purple". The Color Purple is a Pulitzer prize winning novel written by Alice walker, The original book sold over 4million copies, when the novel was published it was seen as controversial and to this day is still seen as controversial the reasons for in being controversial are " the representation of black men", bodily abuse, sexual abuse and lesbianism. Due to the outcry of people this novel was made in to a Oscar winning film, the same year that the color purple was released a film called Out Of Africa was released and won film of the year, the only explanation could be due to the color purple being a hard hitting film which puts men in a bad light they are seen as monogamists for the first half of the film. Alice Walker is a bisexual African American who was criticized for her personal representation of men and her portrayal of all African women's lives. The black men were outraged at her stereotypical view of their heritage and background. The novel "The color purple" is composed of a number of letters that were written between Cilei and her sister Nettie the sisters were separated at a very young age and made a vow to keep in touch. ...read more.

While Ceile and Nettie were separated Nettie met a man called Samuel he was a preacher he was so good to Nettie, they moved to Africa and he took a new post as preacher in a village where they liver with the Olinka tribe. Samuel was a good husband he cared for her loved her and gave her the love she deserved, Nettie had two children that grew up in South Africa and they were going to have the scarification ritual done on them. Harpo was a positive portrayal of a male figure, he was good to his wife Sofia, although Alice Walker had negative views on some men, she gave a small minority of the men good honest characteristics, in my opinion she put these good characters in to counterweight the negative male imagery I came to this conclusion after noticing throughout the first three quarters of the novel there was no positive male input and then out of nowhere popped up five fantastic men who could do nothing wrong almost as if she had realised her mistake and tried to make right what she had done wrong. ...read more.

Although Albert was a strong character in the first half of the novel you can see how he finally decides to become subservient to Ceile, the main reason for this is due to her wearing the trousers, she has her own busyness that is thriving on the sale of trousers. Harpo try's the trousers on with Sofia and at this point there is equality between male and female. There is a famous quote by Stevie Wonder "Show me how to do like you, Show me how to do it" this simply means if the men wear shown how to love they would love there selves. Men from a young age were shown their fathers beating their wives and to all boys this would be seen as something normal, an every day occurrence. Although Harpo and Sofia are seen as equal the underlying fact is that he tried to beat her a number of times, this was a problem for him due to his size and stature. The reasons for trying to beat Sofia were pressers of the local men. The line "It pisses God off when you walk by the colour purple in a field and don't even notice it" is very powerful because walking passed is the same as turning your nose up at racial inequality, suffering and abuse against women. ...read more.