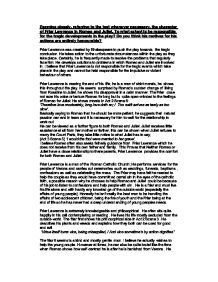 Friar Lawrence was created by Shakespeare to push the play towards the tragic conclusion. He takes action to the unfortunate circumstances within the play as they take place. Certainly, he is frequently made to resolve the problems that regularly face him. He develops solutions to problems in witch Romeo and Juliet are involved in. I believe that Friar Lawrence is not responsible for the tragic events which take place in the play and cannot be held responsible for the impulsive or violent behaviour of others.

Friar Lawrence is nearing the end of his life; he is a man of strict morals, he shows this throughout the play. He seems surprised by Romeo’s sudden change of liking from Rosaline to Juliet, he shows his disapproval in a calm manner. The Friar dose not raze his voice or lecture Romeo for long but is quite open-minded to the feelings of Romeo for Juliet. He shows morals in Act 2 Scene 6:

‘Therefore love moderately, long love doth so; / Too swift arrives as tardy as too slow’.

Basically saying to Romeo that he should be more patient, he suggests that natural passion can end in tears and it is necessary for him to wait for the relationship to work out.

He can be viewed as a farther figure to both Romeo and Juliet. Juliet receives little assistance at all from her mother or farther, this can be shown when Juliet refuses to marry the Count Paris, they take little notice to what Juliet has to say;

I believe Romeo often also seeks fatherly guidance from Friar Lawrence which he does not receive from his own father and family. This Proves that Neither Romeo or Juliet have a close relationship to there parents, Friar Lawrence provides the comfort for both Romeo and Juliet.

Friar Lawrence is a man of the Roman Catholic Church; He performs services for the people of Verona and carries out ceremonies such as weddings, funerals, baptisms , confessions as well as celebrating the mass. The Friar may have felt he needed to help the couple as they would have committed carnal sin in the eyes of the catholic faith, a possible reason why he chooses to help Romeo and Juliet could be because of his job to listen to confessions and help people with sin. He is a friar and must live his life alone and with hardly any knowledge of the outside world (especially the affairs of young people). Honestly he isn’t really the best man to be handling the affairs of two adolescent children, being the fire of youth and the Friar being at the end of life so he has never had a deep understanding of young peoples needs.

Friar Lawrence is extremely knowledgeable and philosophical. He often sits quite happily in his cell contemplating or reading. He lives his life mostly secluded from the outside world. The friar first shows his philosophical side in Act 2 Scene 3. He describes his plants and weeds and explains how they both can be used for good and evil.

‘Virtue itself turns vice, being misapplied, / And vice sometime’s by action dignified.’

The friar it seems is a kind and mostly gentle man. I believe he actually wishes to help the young couple. However at times, he can also be quite brutal like the time when Romeo shows how self-centred he is after he is banished from Verona. He definitely is a brave man; by marrying the two lovers he is provoking the wrath of the two most powerful families in Verona.

Another sign of the Friars intelligence is how the Friar can come up with a solution almost every time he is faced the problem. This happens on a number of occasions. For example: when Romeo is banished from Verona he suggest Romeo go to Mantua, or when Juliet is forced to marry Count Paris so friar Lawrence offers her the potion to fake death so that she can be reunited with Romeo, even when all hope seems to be lost Friar Lawrence instantly comes up with a plan on hearing Romeo has not received his letter; the Friar decides to enter the Capulet tomb which is an extremely dangerous thing to do. This is another indication as to how brave Friar Lawrence really is.

The friar is also well trusted and respected. The nurse is a great admirer of the Friar, she also agreed with the Friar and she said ‘O Lord, I could have stayed here all night / To hear good counsel. O what learning is!’

Juliet is frightened by the potion, but Friar Lawrence reassures her of all the effects the potion that will make people believe she is dead. She still trusts Friar Lawrence enough to take it

There is however one flaw to the Friar’s personality. He is old and naïve. He is naïve to think that simply marrying the two lovers’ will end the feud. His naivety is exposed when he asks Juliet to join a nunnery when she sees Romeo’s dead corpse in the tomb this simply wouldn’t suit a young girl.  With Friar Lawrence’s good intentions and quick devising plans he can also be naïve in this respect.

Friar Lawrence Is purposely put into the plot to really send the plot towards its tragic end. The friar reacts and responds to the problematic circumstances In a way that causes the play to be driven to the ending. Simply without the Friar the play could not of taken place. The friar decided to marry Romeo and Juliet he was certainly going to have to help them through any problems they would face during the course of the play. The other characters in the play cause most of the trouble that interfere with Romeo and Juliet’s passionate relationship. He had to marry Romeo and Juliet as he is a friar and he can only perform the wedding ceremony. It was his religious duty to marry then if they had sex outside of marriage it would be a grave cardinal sin in the eyes of the Catholic Church. When Both Romeo and Juliet during the play say they will commit suicide the Friar simply must help them. He could also not let Juliet take place in the bigamous marriage with Paris. There is 3 sins that take place witch it is the Friars duty to stop from taking place (suicide, bigamy and sex outside of marriage).

I personally believe that Friar Lawrence is not to blame for all of the tragic events. He is trying to do his religious duty, and his duty as a fatherly figure. He tries his very best to help the couple, however are usually ruined by other characters in the play who cause more problems so the initial plans set up by the friar are ruined every time.

Other Characters in the play are to blame more so than the Friar. Tybalt and Mercutio, in my opinion, caused the most problems. The fight was unnecessary and was simply for very improper causes. Tybalt had come for Romeo, but ended up killing Mercutio.

Romeo is also much to blame. It is his impulsive behaviour that causes the main problems. There was no need for Romeo to be so careless to kill Tybalt. He did something that he knew was wrong. Another major incident was when he killed Count Paris. When Romeo killed Paris he had sealed his fate, if he didn’t commit suicide then he would have been executed.

The Capulet and Montague families are also involved. These two families have had hate for each other for many years. If the parents of the two families could settle their differences and be mature enough to then most of these problems would not have occurred. If there had not been a feud in I am almost certain none of these problematic circumstances would have taken place.

Most characters in the play contribute to the fall of Romeo and Juliet far more than Friar Lawrence. Friar Lawrence is the one who tries to clear up mess left by these other characters.

Friar Lawrence himself shows some fearfulness in the play but it is fate. If Friar Lawrence had stayed with Juliet in the Capulet vault, he would have probably prevented Juliet from committing suicide. Yet he had to panic as the Watch approached, in order for Juliet to die and the tragic conclusion to occur.

He marries Romeo and Juliet for three main reasons. First of all he wants to end the feud between the two houses. He sees marrying the two as a way to end it,

‘For this alliance may so happy prove / To turn your households rancour to pure love.’ Secondly he does not want the two to the 3  carnal sins. He is upholding his religious duty by marrying them. Additionally he can tell that the couple truly are in love although they may not be ready for marriage. The advice that is given is the right advice. If other characters had not interfered and other unfortunate events had not occurred then the play may have ended happily. However this is a tragedy and his plans must fail.

When he gives Juliet the potion to fake his death this potion is as the lesser of three evils. Juliet could commit suicide, have a bigamous marriage with Paris or take the potion and live with Romeo, her husband.

If there is a flaw to Friar Lawrence it is certainly his naivety. He thought that by simply marrying Romeo and Juliet he could end the feud. It may have caused even more trouble within Verona and it could have created more harm than good. Bad plans like asking Juliet to join a nunnery are due to him not being the right person to help the young couple with his lack of knowledge of young people’s relationships.

In conclusion, Friar Lawrence is a good man, who tried his most hardest to help the situation between Romeo and Juliet and the family feud between the Capulet’s and the Montague’s.  His motives are entirely selfless and horrible and it is the interference of the other characters, rather than his own actions, which lead to the fall and tragic conclusion of Romeo and Juliet.