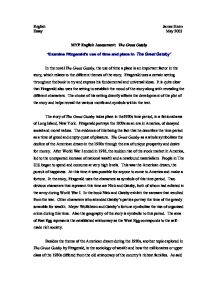 'Examine Fitzgerald's use of time and place in The Great Gatsby'.

English James Heim Essay May 2003 MYP English Assessment: The Great Gatsby 'Examine Fitzgerald's use of time and place in The Great Gatsby' In the novel The Great Gatsby, the use of time a place is an important factor in the story, which relates to the different themes of the story. Fitzgerald uses a certain setting throughout the book to try and express his fundamental and universal ideas. It is quite clear that Fitzgerald also uses the setting to establish the mood of the story along with revealing the different characters. The choice of his setting directly affects the development of the plot of the story and helps reveal the various motifs and symbols within the text. The story of The Great Gatsby takes place in the1920s time period, in a fictional area of Long Island, New York. Fitzgerald portrays the 1920s as an era in America, of decayed social and moral values. The evidence of this being the fact that he describes the time period as a time of greed and empty quest of pleasure. The Great Gatsby as a whole symbolizes the decline of the American dream in the 1920s through the era of unique prosperity and desire for money. ...read more.

With this information derived from Fitzgerald's text, we can confidently say that the setting of The Great Gatsby is an important part of the story, both the time, and place. Throughout the novel, places and settings emphasize the various aspects of the 1920s American society. The geography plays an important role in the book to express these aspects. The two obvious areas are the areas of East Egg and West Egg, but there are more place with meanings beyond these two areas. The valley of ashes is a place in the book which is mentioned from time to time by Nick. The word 'ashes' in the name 'valley of ashes' implies the remains of something. The valley of ashes portrays the moral and social decay of America in the 1920s. The mentioning of New York City relates to the not reserved, uninhibited, quest for money and pleasure (the American dream) during this time period. Along with these places the East in general in the book portrays the moral decay and cynicism of New York City, whilst the west is related to more traditional social values and ideals. ...read more.

This is characterised by the name of the place; Ashes suggest the meaning of dust/remains. In a way the valley of ashes is a place where New York City's ashes are dumped. New York City in the story portrays what America was like in the 1920s, where everything was going on, money was being made, and a time when crime was at a high. In The Great Gatsby, the use of time and place are very significant. Without the setting as it is, Fitzgerald couldn't have written a book with the same meanings and themes as it has now. The time of the 1920s is crucial in the book, as this was the time just after World War I, during the time of the American dream, and the new upper class. Along with this the use of places are also important in the book. The use of East and West, two different areas with different lifestyles, along with New York City and The Valley of Ashes, comparing the rich to the poor. With many novels, the setting is just a base for the actual story. With Fitzgerald and The Great Gatsby, this is different. Fitzgerald incorporated the setting into the meaning and themes of the book, so that he could create an in-depth story with significance. ...read more.