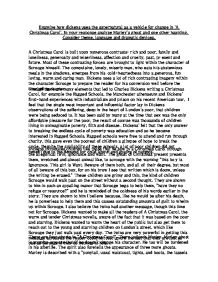 Examine how dickens uses the supernatural as a vehicle for change in 'A Christmas Carol'. In your response analyse Marley's ghost and one other haunting. Consider theme, language and dramatic devices.

Examine how dickens uses the supernatural as a vehicle for change in 'A Christmas Carol'. In your response analyse Marley's ghost and one other haunting. Consider theme, language and dramatic devices. A Christmas Carol is built upon numerous contrasts: rich and poor, family and loneliness, generosity and miserliness, affection and cruelty, past, present and future. Most of these contrasting forces are brought to light within the character of Scrooge himself. The compulsive, lonely, miserly man, who eats his abstemious meals in the shadows, emerges from his cold-heartedness into a generous, fun loving, warm and caring man. Dickens uses a lot of rich contrasting imagery within the character Scrooge to prepare the reader for his conversion well before the concluding chapter. Though there are many elements that led to Charles Dickens writing a Christmas Carol, for example the Ragged Schools, the Manchester athenaeum and Dickens' first-hand experiences with industrialism and prison on his recent American tour, I feel that the single most important and influential factor lay in Dickens observations of the suffering, deep in the heart of London's poor, that children were being seduced to. It has been said by many at the time that sex was the only affordable pleasure for the poor, the result of course was thousands of children living in unimaginable poverty, filth and disease. Dickens' felt that the only answer to breaking the endless cycle of poverty was education and so he became interested in Ragged Schools. Ragged schools were free to attend and run through charity, this gave even the poorest of children a glimpse of hope to break the cycle. Despite the availability of these schools, a lot of poor children did not benefit due to the demand for child labour and apathy of parents. Dickens introduces children like those that he saw in a Christmas Carol through the allegorical twin, ignorance and want. The ghost of Christmas present presents them, wretched and almost animal like, to scrooge with the warning "this boy is Ignorance. ...read more.

However Dickens was ultimately writing a Christmas novella and does not want to totally terrify his readers, Dickens wanted to get his message across which was to treat others kindly and with respect no matter which class they were in. We see Dickens weaving in little bits of humour to uplift the reader's spirits and relieve the tension that has already built up. After being told the appearance of the ghost was transparent we then hear "Scrooge had often heard it said that Marley had no bowels, but he had never believed it until now." The lack of this certain internal; organ is meant to make the reader laugh making the story more palatable. In spite of some humorous touches Marley presence is suppose to have a serious message for Scrooge and an impact on all of the readers. Dickens wants to make it clear to everyone that Marley lives in torment because of the way he lived his life, he is trying to make people change there ways with certain subtle well chosen words. He also shows people how they may be tormented in the afterlife, which Victorians were very curious about, as for Marley's selfishness in life he is now "doomed to wander through the world - oh, woe is me! And witness what I cannot share, but might have shared on earth." This is not Marley's only outburst. Dickens really wants to hammer home his message about Marley's agony due to his own lifestyle, "Business... Mankind was my business. The common welfare was my business; charity, mercy, forbearance, and benevolence were all, my business." In conclusion I think the reason for Dickens using Marley as the first ghost is for the shock of Scrooge seeing his business partner so unhappy after his life has ended. This obviously has a massive impact upon him as he is so scared to witness the other ghosts oncoming. ...read more.

The audience will of course relate to this as most peoples worst fear is people not missing them when they die, this causes people to look at themselves and change for the better. The spirits all have there own affect on Scrooge, the spirit of Christmas past makes Scrooge regret that past, the spirit of Christmas present makes Scrooge realise the importance of Christmas and how to celebrate it blissfully, and finally the spirit of Christmas still to come makes sure Scrooge is too scared to revert back to his old ways. The main lesson learnt by Scrooge is that he should be nice to everyone no matter what day it is, people that are less well off than him need his help. Other lessons that he learns are that being heartless, selfish and greedy has no rewards and that no one will be there to mourn you death. Also that he should enjoy his money and share with others because money will control you head and leave your heart in the shadows as Scrooge's was for so long. I believe that the novella is still popular in today's times as it brings to light all the joys and happiness that everyone likes to feel at Christmas. Also it helps that the novella was very well written and that it still creates all the emotions it was written to create in modern people. Dickens engages all readers of all ages as he based all of his character on human charactistics which then makes the novella an allegory for human behaviour. After reading this novella every person looks at them selves through an imaginary mirror and thinks about what they can change for the better within themselves, this is another reason I think the novella is so popular. I do believe that Dickens "little Carol" as it was first known will carry on through generations and there will probably be another girl sat at her computer in 50 years time writing about its success and message. ...read more.