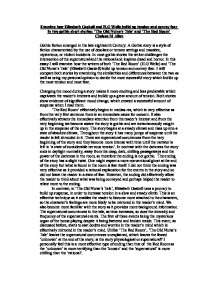 Examine how Elizabeth Gaskell and H.G Wells build up tension and convey fear in two gothic short stories; 'The Old Nurse's Tale' and 'The Red Room' Chelsea M Allen Gothic fiction emerged in the late eighteenth Century. A Gothic story is a style of fiction characterized by the use of desolate or remote settings and macabre, mysterious, or violent incidents. In most gothic stories the writer challenges the intersection of the supernatural and the rational and inspires dread and horror. In this essay I will examine how the writers of both 'The Red Room' (H.G Wells) and 'The Old Nurse's Tale' (Elizabeth Gaskell) build up tension and convey fear. I will compare both stories by examining the similarities and differences between the two as well as using my personal opinion to decide the most successful story which builds up the most tension and most fear. Changing the mood during a story makes it more exciting and less predictable which captivates the reader's interests and builds up a great amount of tension. Both stories show evidence of significant mood change, which created a successful amount of suspense when I read them. 'The Red Room' effectively begins in medias-res, which is very effective as from the very first sentence there is an immediate cause for concern. ...read more.

The house, like most gothic stories, is very isolated and desolate, which creates a scary and eerie atmosphere. It is described as 'overshadowed' by the 'gnarled thorn-trees, and old oaks, all white and peeled with age', which adds to the daunting ambience. Throughout the story Elizabeth Gaskell tends not to use the setting as an important factor in order to convey fear and reverts more to other factors. In my opinion H.G Wells has successfully created a more gothic and supernatural feel through the use of the setting than Elizabeth Gaskell. I feel this is because H.G Wells has used a lot more description on setting than Elizabeth Gaskell and has carried the gothic setting on all the way throughout the story apart from the end where he has used the daylight-normality setting to mirror the rational ending. Another important factor in building up tension and conveying fear is the mystery of the story. This is effective as it keeps the reader in the dark about what is going on, and consequently more tense. In 'The Old Nurse's Tale' and 'The Red Room' there are many unanswered questions. In 'The Old Nurse's Tale' the first one to be introduced is why there are so few people left at the house? ...read more.

I also think an effective method of instilling fear, tension and suspense are traditional themes such as the gothic settings, the use of light and dark, and the overtones of death, all typically gothic. There are many similarities in the two stories, for example; they are both written in the subjective, they are both set in desolate surroundings and both contain many overtones of death. There are also many differences in the two stories; they use different journeys to build up tension, and 'The Old nurse's Tale' ends supernaturally and the 'Red Room' ends rationally. Some parts of each story I did not like, for example, in the 'Red Room' the old withered servants appear very old and extremely exaggerated beyond the point of seriousness, and I did not like the long-winded irrelevant points in 'The Old Nurse's Tale'. Overall I think the most effective story for instilling fear, tension and suspense is 'The Old Nurse's Tale' as it was more easily understandable and it left a more effective ending as it left the supernatural occurrences left unexplained whereas the 'Red Room' provided a rational explanation for the events. I also found the story more interesting and I found the supernatural events more intense. I also found that 'The Old Nurse's Tale' was generally more gothic than 'The Red Room' as 'The Red Room' was not gothic at the end of the story. ...read more.