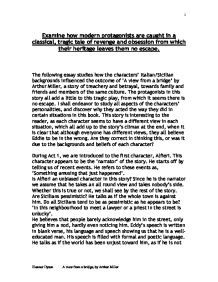 Examine how modern protagonists are caught in a classical, tragic tale of revenge and obsession from which their heritage leaves them no escape.

Examine how modern protagonists are caught in a classical, tragic tale of revenge and obsession from which their heritage leaves them no escape. The following essay studies how the characters' Italian/Sicilian backgrounds influenced the outcome of 'A view from a bridge' by Arthur Miller, a story of treachery and betrayal, towards family and friends and members of the same culture. The protagonists in this story all add a little to this tragic play, from which it seems there is no escape. I shall endeavor to study all aspects of the characters' personalities, and discover why they acted the way they did in certain situations in this book. This story is interesting to the reader, as each character seems to have a different view in each situation, which all add up to the story's climax at the end, when it is clear that although everyone has different views, they all believe Eddie to be in the wrong. Are they correct in thinking this, or was it due to the backgrounds and beliefs of each character? During Act 1, we are introduced to the first character, Alfieri. This character appears to be the 'narrator' of the story. He starts off by telling us of recent events. He refers to these events as, 'Something amusing that just happened'. Is Alfieri an unbiased character in this story? Since he is the narrator we assume that he takes an all round view and takes nobody's side. Whether this is true or not, we shall see by the rest of the story. Are Sicilians pessimistic? He talks as if the whole town is against him. Do all Sicilians tend to be as pessimistic as he appears to be? 'In this neighbourhood to meet a lawyer or a priest in the street is unlucky'. He believes that people barely acknowledge him in the street, only giving him a nod, hardly even noticing him. ...read more.

Catherine is always running to help Eddie, constantly trying to please, she likes to be treated like a child, and like to be complimented by Eddie. Eddie enjoys to be waited on by Catherine he likes to let her do things for him such as fetch him a beer and light his cigar. Beatrice acts like the odd one out. She seems to compete for affection with Catherine, from Eddie. At this point in the play, Alfieri returns into the script. He tells us that Eddie was a good man, and then he introduces the cousins into the script. It is a short paragraph but tells us a little of Alfieri. He talks in past tense, telling us he was a good man. What does he mean by this? It tells us he thought a lot of Eddie before a certain time, but that his opinion of Eddie has changed. There are three new characters introduced to this play now, two of which will play a vital part in the events to come. Marco, Tony and Rodolfo enter. Tony is the man who was spoken of earlier, the man who was to deliver the immigrants to Beatrice's, Catherines and Eddies home. That means that Marco and Rodolfo are the immigrants. When they are introduced to the family, Eddie gives Marco a handshake, but does not at this point in the play acknowledge Rodolfo. Now, Beatrice introduces Catherine as her sisters' daughter. So now we know that Eddie is Catherines uncle. This gives us entirely different perspective on their relationships, and makes us think that perhaps Eddie and Catherines relationship is bordering on incest. Marco is very polite towards the family, whereas Rodolfo seems shy and stays very quiet. Rodolfo says nothing until Catherine asks of him: - 'How come he's so dark and you're so light Rodolfo?' This is not particularly polite and very inquisitive of Catherine, however since it is her home, she probably feels that she can say what she likes to these people who are so deeply in her and her families debt. ...read more.

Marco finds it difficult, but agrees that he will not harm Eddie. The scene changes back to just before the wedding, Eddie will not permit Beatrice to go to the wedding, Catherine is outraged, and tries to persuade Beatrice but they are interrupted by Rodolfo who shouts, 'Marco is coming, Eddie' He knows that Marco will kill Eddie, but Eddie will not move, no matter how much Beatrice tries to persuade him. Rodolfo tries to apologise to Eddie, is he apologising because he's not a man or because he is more than a man? Eddie wants to fight to prove that he is a man, and Marco wants to fight to show people what he did to him, to get his revenge in a way. Eddie seems to be finding it hard to stay sain. Eddie could easily walk away, but he doesn't want to because of Sicilian honour. The knife, which Eddie is ready to kill Marco with, kills him. His lasts words are to Beatrice, which is interesting, and shows that maybe that's what it took for him to realise that what he had before with Beatrice meant so much more. The play finishes with a speech by Alfieri. A line, which means a lot, is: - '...For that I think I will love him more than any of my sensible clients' It is making a joke out of a clearly unfunny situation, but it lightens the play, and it is a good time to put it in. It finishes with: - 'And so I mourn him - I admit it - with a certain...alarm.' This is a very good place to end the play. Alfieri was the unbiased character who gave us an all-round view, and was a good friend to all the characters involved. ?? ?? ?? ?? 1 1 Eleanor Dyson A view from a bridge, by Arthur Miller ...read more.