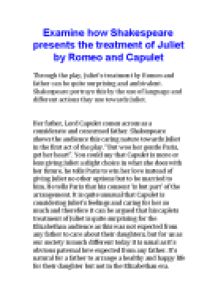 ﻿Examine how Shakespeare presents the treatment of Juliet by Romeo and Capulet Through the play, Juliet?s treatment by Romeo and father can be quite surprising and ambivalent. Shakespeare portrays this by the use of language and different actions they use towards Juliet. Her father, Lord Capulet comes across as a considerate and concerned father. Shakespeare shows the audience this caring nature towards Juliet in the first act of the play.? But woo her gentle Paris, get her heart?. You could say that Capulet is more or less giving Juliet a slight choice in what she does with her future, he tells Paris to win her love instead of giving Juliet no other options but to be married to him. He tells Paris that his consent ?is but part? of the arrangement. It is quite unusual that Capulet is considering Juliet?s feelings and caring for her so much and therefore it can be argued that his caplets treatment of Juliet is quite surprising for the Elizabethan audience as this was not expected from any father to care about their daughters, but for us as our society is much different today it is usual as it?s obvious paternal love expected from any father. It?s natural for a father to arrange a healthy and happy life for their daughter but not in the Elizabethan era. ...read more.

faster and he does not want this, we get the idea that Capulet wants to keep Juliet for as long as possible. Moreover, Capulet treats Juliet with importance. Shakespeare presents this by the adoring approach used by Capulet. ?She is the lady of my earth?. The use of ?lady? shows value as he is not calling her a ?girl? or ?child? he decides to call her ?lady? which gives her seem significant. The use of astral imagery ?earth? shows how appreciated Juliet is to Capulet, he presents that Juliet is his world and without her there is not life. Juliet?s father loves her, which is quite unpredicted for an Elizabethan father as they usually didn?t care much for their girls as they were seen as objects and irrelevant to them. However Capulet treats Juliet much differently to what is expected in the Elizabethan era, but quite usual for our society today so it is not surprising for us. He sees her as his legacy and wants her to grown to be just like him. At this point in the play we see how much Capulet loves Juliet and how he try?s his best to make sure she has a happy and loving future. On the other hand, Capulet doesn?t play good father for too long, he is not too happy when Juliet refuses to marry Paris. ...read more.

Romeo treats Juliet with priority. Shakespeare presents this by the affectionate way Romeo talks about Juliet. ?Juliet is the sun?. The use of astral imagery ?sun? implies that Romeo believes without Juliet there is no life and she lights up his world. This is similar to how Capulet viewed Juliet. Capulet also used Astral imagery to describe Juliet ?lady of my earth? so at this point we could say the treatment of Juliet from birth Romeo and Capulet is very similar. Also, Romeo sees Juliet as the epitome of love; she is the meaning of love! Moreover, Romeo treats Juliet with trust. Shakespeare shows this by the over-dependence on Juliet from Romeo. He gives her power by allowing her to make decisions such as plan their wedding. Planning a wedding is usually the bride?s job in our society today but in the Elizabethan era, they didn?t get much say on their wedding either. Juliet also controls his moods. ?Nothing can be ill if she is well?. The treatment by Romeo is very hyperbolic and melodramatic, he chooses to excaudate allot as he is hopelessly in love with her, he would do almost anything to be with her. Overall the treatment of Juliet from Romeo and Capulet are bother quite unexpected in different ways. I think that her father ...read more.