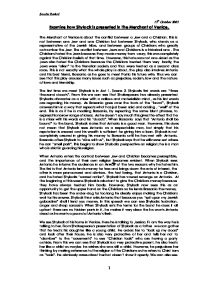 Examine how Shylock is presented in The Merchant of Venice.

Examine how Shylock is presented in The Merchant of Venice. The Merchant of Venice is about the conflict between a Jew and a Christian. This is not between one Jew and one Christian but between Shylock, who stands as a representative of the Jewish tribe, and between groups of Christians who greatly outnumber the Jew. The conflict between Jews and Christians is a historical one. The Christians hated the Jews because they made money from usury; this was completely against the Christian beliefs of that time. However, this hate was not one-sided as the Jews also hated the Christians because the Christians treated them very badly; the Jews were "alien" to the Venetian society and thus were treated as a second class race. This is not exactly what the whole play is about, the play also involves Antonio and his best friend, Bassanio as he goes to meet Portia his future wife. Thus we can see that this play arouses many issues such as prejudice, racism, law and the nature of love and friendship. The first time we meet Shylock is in Act 1, Scene 3. Shylocks first words are "three thousand ducats". From this we can see that Shakespeare has already presented Shylocks character as a miser with a callous and materialistic mind, as his first words are regarding his money. ...read more.

This is just showing the similarities between Jews and Christians. Then Shylock says that from Christian example he will seek revenge on Antonio, Shylock is influenced by the Old Testament principle of an eye for an eye and a tooth for a tooth. The Christians now leave the stage and Tubal, a Jew, enters. Tubal acts like a man who seems to be giving comfort but is not really, he is just helping to fluctuate Shylocks temper. Tubal tells Shylock about Jessica, he is deliberately reminding Shylock of the precious things he has lost, such as a ring given to Shylock from his first wife. Shylock is so angry that he wishes Jessica was dead and the "ducats in he coffin". Tubal continues to make Shylock feel more and more angry that towards the end of the scene Shylock is completely intent on seeking revenge on Antonio. It is thus possible to see the intensity of his anger as more towards the material loss than the immediate family. In Act 3, Scene 3 we see Shylock here already in the middle of a conversation, he is telling the jailer to look at Antonio. Antonio is trying to speak to Shylock but Shylock does not want to know. ...read more.

However, the Christians do not realise that they cannot force someone to change their religion. They can still be a Jew in their heart. I think the Christians in this play are extremely horrible to Shylock, they show him no mercy after they tell him to show mercy. I think Shylock was supposed to be given his bond, and the only reason why he really wanted the bond was to get an upper hand on the Christians. I think Shylock had been forced to act in this way as he was suppressed by the Christians. However Elizabethan play-goers would have seen Shylock as the ultimate villain, as he dealt with usury. They must have thought that Shylock deserved everything he got. The Christians of that time also believed that the Jews ate the flesh of Christians, so for them Shylock was the villain of the play, robbing most of the comedy from the play. From this we can see why he was so abused by the Christians and called "villain", "dog" and "wolf". However, nowadays people may see Shylock as someone forced to act in such as way from all the pressure he is put under. We can see that Shylock just wants to lead a life away from Christians who hate him. Saadia Rashid 13th October 2003 1 ...read more.