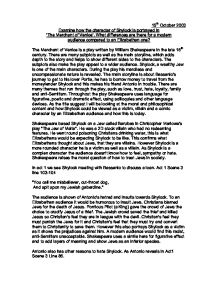 Examine how the character of Shylock is portrayed in 'The Merchant of Venice'. What differences are there for a modern audience compared to an Elizabethan one?

15th October 2003 Examine how the character of Shylock is portrayed in 'The Merchant of Venice'. What differences are there for a modern audience compared to an Elizabethan one? The Merchant of Venice is a play written by William Shakespeare in the late 16th century. There are many subplots as well as the main storyline, which adds depth to the story and helps to show different sides to the characters. The subplots also make the play appeal to a wider audience. Shylock, a wealthy Jew is one of the main characters. During the play his merciless and uncompassionate nature is revealed. The main storyline is about Bassanio's journey to get to his lover Portia, he has to borrow money to travel from the moneylender Shylock and this makes his friend Antonio in trouble. There are many themes that run through the play, such as love, trust, hate, loyalty, family and anti-Semitism. Throughout the play Shakespeare uses language for figurative, poetic and dramatic effect, using soliloquies and other language devices. As the title suggest I will be looking at the moral and philosophical content and how Shylock could be viewed as a victim, villain and a comic character by an Elizabethan audience and how this is today. Shakespeare based Shylock on a Jew called Barubas in Christopher Marlowe's play "The Jew of Malta". ...read more.

Act1 scene 3 Line "Be nominated for an equal pound, Of your fair flesh, to be cut off" Shylock challenges Antonio to have such a forfeit so he could get revenge. Antonio is confident that his ships will come back on time. This further heightens the feeling that Shylock is a villain. Shylock in his soliloquy expresses his feelings about Antonio. Act1 Scene3 Line 38-39. "If I can catch him once upon the hip, I will feed fat the ancient grudge I bear him." Shylock wants revenge for the prejudice that has been against him because of his religion and Job. He has been unfairly treated and wants revenge on Antonio and the Christian religion. Shylock wanting to hurt Antonio and Christians portrays him as a bloodthirsty villain. Shylock's conversation with Tubal reveals his intentions to get his revenge on Antonio. Act 3 scene 1 Line 91-92. "I am very glad of it. I'll plague him, I'll torture him." Shylock is being Devious as he is planning to take the pound of flesh from Antonio slowly causing as much pain and suffering as possible. It shows how Shylock's revenge and anger has been building up. Shylock's lust for Christian blood further adds to the mood that he is a villain. When Antonio seals to the bond Shylock says. ...read more.

The Merchant of Venice is like other Shakespeare plays in structure, in that it has five acts and has varied plots which is one of the reasons its such a popular play. The play is set in two cities, Venice and Belmont. Belmont is a fictitious city created by Shakespeare to create a contrast to the hard life in Venice. It's a feminine world where Portia and females are in charge and everyone is peaceful and helpful. Where as Venice is a more masculine city where there are Dukes and Lords who control the laws and there is also lots of violence and hate, this creates a contrast to Belmont. When Portia goes to Venice she has to dress up to be clever and beat Shylock at his own game. This adds to the feeling that Shylock is a villain and highlights the violence of Venice. Shakespeare uses prose and poetic language through the play. Prose is used for the characters of lesser importance whereas important characters, such as lords speak in poetic language. Shylock speaks in a mixture of prose and poetic language this is for poetic effect. When Shylock is a victim he speaks in poetic language. However when he is a villain he speaks in prose. This helps to create a different side to the character and creates dramatic effect in the scene. Shakespeare writes in "Iambic pentamiter" his play looks like a poem in structure, which is why it is difficult to understand. ...read more.