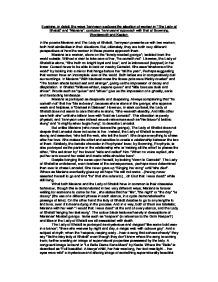 Examine, in detail, the ways Tennyson explores the situation of women in &quot;The Lady of Shalott&quot; and &quot;Mariana&quot;, compare Tennysons' approach with that of Browning, Wordsworth and Keaten.

Examine, in detail, the ways Tennyson explores the situation of women in "The Lady of Shalott" and "Mariana", compare Tennysons' approach with that of Browning, Wordsworth and Keaten. In the poems Mariana and The Lady of Shalott, Tennyson presents us with two women; both hold similarities in their situations. But, ultimately, they are both very different perspectives of how the women in these poems approach them. Mariana is a woman, alone on the "lonely moated grange"; Isolated from the world outside. Without a man to take care of her, "he cometh not". Likewise, the Lady of Shalott is alone, "She hath no knight loyal and true", and is imbowered (trapped) in her tower. Cursed never to be able to look on nearby Camelot. She sees "shadows of the world" by looking into a mirror that hangs before her "all the year", Perhaps suggesting that women have an incomplete view of the world. Both ladies are in comparatively dull surroundings. In Mariana "With blackest moss the flower-pots were thickly crusted" and "The broken sheds looked sad and strange", giving us the impression of decay and dilapidation. ...read more.

and lilies in the Lady of Shalott are all associated with death. The Lady of Shalott is portrayed as mysterious and magical "like some bold seer in a trance", "there she weaves by night and day, a magic web with colours gay". And a subject of myth; when the "reapers, reaping early...hear a song that echoes cheerly" they say "'tis the fairy lady of Shalott" even though they don't know where the song is coming from; further creating an image of supernatural properties possessed by the lady. A congruent image is found in "La Belle Dame Sans Merci" by Keats. Where the "Belle" is described as "Full beautiful- A faerys' child, her hair was long, her foot was light... her eyes were wild" a mysterious and alluring image of something supernaturally beautiful. She found "roots of relish sweet, and honey wild, and manna dew" for the knight in the poem; it is almost as if she is bewitching him with potions. She is portrayed as a seductress; deceiving the knight, telling him "I love thee true!" and then lulling him to sleep in her "elfin grot". ...read more.

Both Mariana and the Lady of Shallot are seeking reciprocation of their love, and acknowledgement of their existence. It is as if Mariana exists only because the Narrator acknowledges her, most of the description in the poem is of the scenery around her. The Lady of Shalott, already attributed a mythical and questionable existence by the locals. She chases Lancelot, only to die trying to reach him. But ultimately achieves her goal, he comments "She has a lovely face", ultimately, this may seem more than a little inadequate, for we, as the readers know fully what she has been through, chasing Lancelot. He, however, does not. From this it could be argued from this that Womens' efforts often go unknown. To conclude, Tennyson portrays women as dependant on love and attention from men, perhaps even more than a little eccentric and melodramatic. Browning prefers to depict the jealousy and paranoia of the men that they love; while being subservient and easily pleased. Keats casts a woman firmly as a supernatural seductress, villain and murderer in "La Belle Dame Sans Merci". And Wordsworth prefers to give a romantic, almost angelic description of a woman, and perhaps highlight how she was "not too bright or good for human natures' daily food". With a continuing theme of subservience. ...read more.