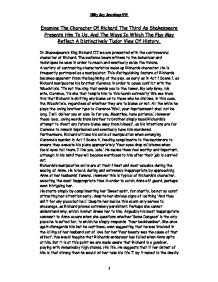 Examine The Character Of Richard The Third As Shakespeare Presents Him To Us, And The Ways In Which The Play May Reflect A Distinctively Tudor View Of History.

Examine The Character Of Richard The Third As Shakespeare Presents Him To Us, And The Ways In Which The Play May Reflect A Distinctively Tudor View Of History. In Shakespeare's King Richard III we are presented with the controversial character of Richard. The audience bears witness to the behaviour and techniques he uses in order to reach and eventually seize the throne. A variety of contrasting characteristics make up Richards character. He is frequently portrayed as a manipulator. This distinguishing feature of Richards becomes apparent from the beginning of the play, as early as in Act 1 Scene 1, as Richard manipulates his brother Clarence in order to cause conflict with the Woodville's. 'Tis not the king that sends you to the tower. My lady Grey, his wife, Clarence, 'tis she that tempts him to this harsh extremity' We see from this that Richard is shifting any blame on to those who he dislikes, in this case, the Woodville's, regardless of whether they are to blame or not. All the while he plays the loving brother type to Clarence 'Well, your imprisonment shall not be long. I will deliver you or else lie for you. ...read more.

On numerous occasions does Richard use his deformities to his advantage to draw pity and guilt from others, it adds to his ability to act innocent and allows him to give explanations for his actions. In Act 1 Scene 3 when Richard stirs up trouble and makes accusations against the Woodvilles he defends himself with his deformities 'Because I cannot flatter and look fair, smile in men's faces, smooth, deceive, and cog, duck with French nods and apish courtesy, I must be held an enemy.' Richard puts on another performance in Act 2 Scene 1, when delivering the news to Edward that Clarence has died. Although he is the one responsible for the murder of Clarence he makes himself the most illusive suspect by seizing the chance to accuse and throw suspicion on the Woodvilles 'less noble ... not in blood', once again to cloak his guiltiness. The audience bare witness to Richards's finest performance when he acts as if he is not worthy and unwilling to receive the crown in Act 3 Scene 7. Richard takes a tremendous risk, but once again it pays out the greatest reward, he gains the backing of the mayor and citizens through acting and reverse psychology 'Alas, why would you heap this care on me? ...read more.

There are a number of theories on the death of the princes. One is that Richard did have them murdered, but even this can be justified as recent evidence suggests strongly that Edward was a bastard meaning his sons were also illegitimate and had no claim whatsoever to the throne, meaning that Richard did have the strongest claim, and even if he did have them murdered it was purely to preserve the royal bloodline and keep it from becoming tainted. Although Richard is the most likely suspect, some people believe that he may have kept the princes in the tower for the entire length of his reign as it was only two years, then Henry VII had them murdered when he became King as it would threaten his claim. He would not want anything to get in his way, as Henry Tudor was the only claim to the throne that the house of Lancaster had left. It is for these reasons that it is highly likely that Shakespeare's Richard III was an extreme exaggeration in order to create an interesting character during a Tudor reign, in reality Richard may have made various good and bad decisions, but was nothing like the tyrant presented to us in the play. Billy Jay Jennings 5W 1 ...read more.