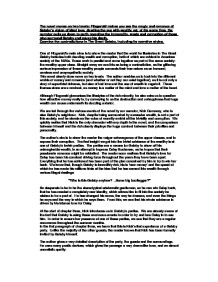 Examine the contradictions in The Great Gatsby, including its narrative styles.

The novel moves on two levels: Fitzgerald makes you see the magic and romance of Gatsby's vision of ideal love, dazzling the eye with wealth; yet, at the same time, the narrator pulls us down to earth revealing the immorality, waste and corruption of those who surround Gatsby and cause his death. Examine the contradictions in The Great Gatsby, including its narrative styles. One of Fitzgerald's main aims is to show the reader that the world he illustrates in The Great Gatsby includes both dazzling wealth and corruption, both of which are evident in American society of the 1920s. These work in parallel and come together as part of the same society: the wealthy upper class. Straight away we see this as being a contradiction, as the glittering surface impression of these wealthy people conceals their true nature as an immoral, careless and unsympathetic society. This novel clearly does move on two levels. The author enables us to look into the different worlds of money and romance (and whether or not they can exist together), as it is not only a story of superficial richness, but also of lost love and the use of wealth to regain it. These themes alone are a contrast, as money is a matter of the mind and love a matter of the heart. Although Fitzgerald glamorises the lifestyles of the rich minority, he also asks us to question how attractive money really is, by conveying to us the destruction and unhappiness that huge wealth can cause underneath its dazzling exterior. We are led through the various events of the novel by our narrator, Nick Carraway, who is also Gatsby's neighbour. ...read more.

Despite toiling for hours on end working for the rich, who should pay them well, the servants never earn enough to enjoy the lifestyle of their employers. Though we are led to believe that hard work pays off, this novel suggests the opposite. The word 'ravages' immediately tells us that everything has been completely destroyed by Gatsby's guests. This demonstrates their utter carelessness, and shows they have lost all perspective concerning money. They are so conceited and self obsessed that they no longer have respect for other people's property, due to the fact that many of them arrived at the event without even being invited. 'Ravages' also hints at the seedy affairs going on at the party between the 'young female guests' and the 'stouter and more stable' gentlemen. What started as order has been reduced to total chaos by the immoral upper class. The triviality of these people is made obvious through their actions: '...introductions forgotten on the spot, and enthusiastic meetings between women who never knew eachother's names.' The wealthy live for these empty parties and are happy to drift through life without any real purpose; this is displayed clearly by the 'unrestful' Buchanans. However, there is almost a sense of contrast between Gatsby himself and his guests. We know that, unlike the rest of the rich society, he does have a goal in mind. His sole purpose and determination to succeed in living this kind of life, though empty for most, is to be with Daisy again. In the following paragraphs, we see that for every pleasure enjoyed by the wealthy, there is some kind of harsh reality to be faced by someone else: 'There was a machine in the kitchen which could extract the juice of two hundred oranges...if a little button was pressed two hundred times by a butler's thumb.' ...read more.

Gatsby's death, at the end of the novel, is really the pinnacle of the entire story, and the ending is what the book has really been all about: Gatsby's eventual realisation, which comes all too late, that reality can never compare to the dream he has held on to for so long. Only his own death can show him the harsh truth of life and its tragedies: '...and shivered as he found out what a grotesque thing a rose is and how raw the sunlight was upon the scarcely created grass.' The reader has learned that true morality exists only for those who are not materially conscious, and in effect, we can see that there are two kinds of morality - for the rich, and for the poor. This is demonstrated clearly by Nick, who, as a member of the 'less rich' society, is consistent in his moralistic stance throughout the novel, continuously drawing our attention to the actions of the corrupted indivduals that cause Gatsby's eventual death. Daisy, by killing a woman in Gatsby's car, represents the fact that unmaterialistic people are often downtrodden by the wealthy. The rich themselves believe that money can buy them everything, including, as in Daisy's case, a guilt-free conscience. An underlying contradiction of the novel is that Gatsby's rich guests all thought that happiness rested in money, but the truth was that it does not, and never will. For Gatsby, the source of his happiness rested in love, and whilst the rich minority took everything, including love, for granted, Gatsby never did, and it proved to be his demise. The novel's biggest contradiction shows that although love is the source of life, in this instance it has killed a man in his quest to find it. ...read more.