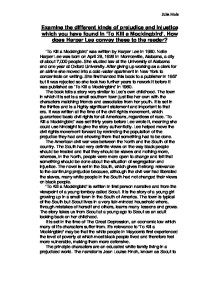 Examine the different kinds of prejudice and injustice which you have found in 'To Kill a Mockingbird'. How does Harper Lee convey these to the reader?

Examine the different kinds of prejudice and injustice which you have found in 'To Kill a Mockingbird'. How does Harper Lee convey these to the reader? 'To Kill a Mockingbird' was written by Harper Lee in 1960. Nelle Harper Lee was born on April 28, 1926 in Monroeville, Alabama, a city of about 7,000 people. She studied law at the University of Alabama and one year at Oxford University. After giving up working as a clerk for an airline she moved into a cold-water apartment in New York to concentrate on writing. She first handed this book to a publisher in 1957 but it was rejected so she took two further years to rework it before it was published as 'To Kill a Mockingbird' in 1960. The book tells a story very similar to Lee's own childhood. The town in which it is set is a small southern town just like her own with the characters matching friends and associates from her youth. It is set in the thirties and is a highly significant statement and important to that era. It was written at the time of the civil rights movement, which guaranteed basic civil rights for all Americans, regardless of race. 'To Kill a Mockingbird' was set thirty years before Lee wrote it, meaning she could use hindsight to give the story authenticity. Lee helped move the civil rights movement forward by reminding the population of the prejudice they had and showing them that something had to be done. The American civil war was between the North and the South of the country. The South had very definite views on the way black people should be treated and that they should be slaves and nothing more, whereas, in the North, people were more open to change and felt that something should be done about the situation of segregation and injustice. The novel is set in the South, which gives it strong relevance to the continuing prejudice because, although the civil war had liberated the slaves, many white people in the South had not changed their views on black people. ...read more.

Tom is an intelligent man and knows what the jury will rule so holds no hope for his release. On the night that he is returned to the Maycomb jail a mob of white males arrive to confront Tom. The gang is made up of angry residents, including Mr Walter Cunningham, the father of a friend of Scout's that Atticus had helped in the past. When the group get there they meet Atticus who is sitting guard outside the cell, as if he was expecting this form of company. They demand that Atticus cooperates with them but before they can get to Tom, Scout, Jem and Dill appear. Scout notices that Mr Cunningham is there and remembers what she has been taught about making polite conversation so asks Mr Cunningham how his entailment is getting along. "Hey, Mr Cunningham. How's your entailment getting' along?" He seems to ignore her but she perseveres and asks him how his son is. Eventually he submits to her questions and decides that he and his gang should not be here while there are children present and departs with the men. Atticus is enormously relieved when the mob has dispersed. Tom had heard everything and, he too, was thankful that they had left. "Mr Finch? They gone?" The trial proceeds and it becomes evident that Tom Robinson is an innocent man. Atticus reveals that it was Mayella who molested Tom and that Mr Bob Ewell, Mayella's father, saw her do this and beat her for it. He exposes their lies and shows that Tom is obviously not guilty but after all the evidence to support this is produced, the jury still find him responsible and charge him. This is an example of the erroneousness of the law and that even the authorities are bias. The black people of America feel wholly cheated and deceived by the establishment. During the trial Tom admits that he helped Mayella with the odd jobs that she asked him to do because he felt sorry for her. ...read more.

'To Kill a Mockingbird' is divided into two sections. Part One and Part Two, though connected with events and actions, have separate identities. Part Two is mostly concerned with Tom Robinson's trial and is well unified, whereas, part One contains several episodes that are relevant to the issue dealt with in Part Two. Part Two focuses on the main theme, racial prejudice still prevalent in the South. Part One concentrates on the characters of Jem, Scout and Atticus. Depicted in the first few chapters are Scout's sense of equality, for example the fact that she invites Walter Cunningham for tea, and Jem's admiration for his father. The main incidents in Part 1 are Miss Maudie's house catching fire, the shooting of the rabid dog, and the children's encounter with Mrs Dubose. The Ewells are introduced in the part One, so that the reader can fully get to know them before the trial. This enables them to see through the act of Mayella and Bob Ewell. The typical characteristics of southern tradition and culture are also depicted in the first part, to allow the reader to understand why Tom Robinson's case was futile from the start. It is noticeable that certain incidents and events take place in the first part to prepare the children for what is going to take place in the second part of the novel. The unifying element of both the parts is the unseen presence of Arthur Radley. He occupies the main interest of the children, which shifts away once the trial begins. At the end of the novel, the attention is brought back to Boo, when he rescues the children from the clutches of Bob Ewell. It is certainly apparent that 'To Kill a Mockingbird' is a well-structured, well-knit, unified work of fiction, with both the parts skilfully interlinked through characters and events. Harper Lee has left no thread loose at the end of the novel, and each episode is written to contribute firmly to the entirety of the book. The chief theme of the novel is that of the mockingbird. ...read more.

Clearly this candidate has remained focused on answering the given question. They have explored various examples of injustice and prejudice, including the obvious racial discrimination against African Americans but also less obvious examples. It is always effective to view the ...

Clearly this candidate has remained focused on answering the given question. They have explored various examples of injustice and prejudice, including the obvious racial discrimination against African Americans but also less obvious examples. It is always effective to view the question from various angles and viewpoints, as is done here successfully.

Evidently a detailed essay which explores both the text itself, and the always-crucial historical and social context. Interesting to see this candidate discuss many examples of discrimination, providing a different perspective on Lee's only novel. Excellent discussion of character, plot all round.

Sound grammar, punctuation, and sentence structure. Very little at fault, well-written and constructed essay. The structure is successful as the candidate begins with context, and gradually develops their essay gaining an increased focus on the question throughout. All though a hugh-word length (not to be expected for exams!) there is no problem with quality of written communication here.