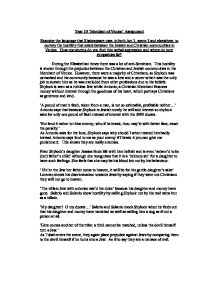 Examine the hostility that exists between the Jewish and Christian communities in Venice. How convincing do you find this verbal aggression and where do your sympathies lie?

Year 10 'Merchant of Venice' Assignment Examine the language that Shakespeare uses, in both Act 1, scene 3 and elsewhere, to convey the hostility that exists between the Jewish and Christian communities in Venice. How convincing do you find this verbal aggression and where do your sympathies lie? During the Elizabethan times there was a lot of anti-Semitism. This hostility is shown through the prejudice between the Christian and Jewish communities in the Merchant of Venice. However, there were a majority of Christians, so Shylock was ostracized and his community because he was a Jew and a usurer which was the only job to sustain him as he was excluded from other professions due to his beliefs. Shylock is seen as a ruthless Jew while Antonio, a Christian Merchant finances money without interest through the goodness of his heart, which portrays Christians as generous and kind. ...read more.

This shows they are really enemies. Even Shylock's daughter Jessica finds life with him hellish and is even 'asham'd to be (her) father's child' although she recognizes that it is a 'heinous sin' for a daughter to have such feelings. She feels that she may be his blood but not by his behaviour. ' If e'er the Jew her father come to heaven, it will be for his gentle daughter's sake' Lorenzo shows his discrimination towards Jews by saying if they were not Christians they will not go to heaven. 'The villain Jew with outcries rais'd the duke' because his daughter and money have gone. Salerio and Solanio show hostility by calling Shylock not by his real name but as a villain. ...read more.

As if to say they are a menace of evil. 3rd Paragraph shylock showing hostility --> Christians and how he suffered Hostility begins in the first act where Shylock says: 'You call me misbeliever, cut-throat dog, and spit on my Jewish gaberdine...' which implies that he has been appallingly treated as a Jew. 'I am as like to call the so again, to spit on the again, to spurn thee too.' Antonio maintains his prejudice towards even though shylock may be willing to help lend money with interest. 'To gaze on Christian fools with varnish'd faces' to teach Jessica not even to look out the window to see the Christians. In act three, scene one Shylock expresses his ferocity and hatred for Antonio and the suffering he has had to tolerate. 'Let him look to his bond! He was wont to call me a usurer.' I the audience feel sympathy at this particular moment when Shylock appeals to common humanity: ...read more.