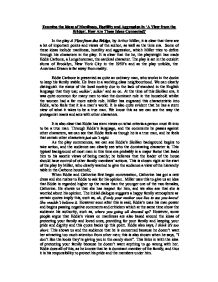 Examine the Ideas of Manliness, Hostility and Aggression in 'A View from the Bridge'. How Are These Ideas Connected?

Examine the Ideas of Manliness, Hostility and Aggression in 'A View from the Bridge'. How Are These Ideas Connected? In the play A View from the Bridge, by Arthur Miller, it is clear that there are a lot of important points and views of the author, as well as the time era. Some of these ideas include manliness, hostility and aggression, which Miller tries to define through his characters in the play. It is clear that the he, the playwright has made Eddie Carbone, a Longshoreman, the cardinal character. The play is set in the outskirt slums of Brooklyn, New York City in the 1950's and as the play unfolds, the American Dream is far away from reality. Eddie Carbone is presented as quite an ordinary man, who works in the docks to keep his family stable. He lives in a working class neighbourhood. We can clearly distinguish the status of the local society due to the lack of standard in the English language that they use; walkin', talkin' and so on. At the time of this Sicilian era, it was quite common for many men to take the dominant role in the household whilst the women had a far more subtle role. Miller has engraved this characteristic into Eddie, who feels that it is a man's world. It is also quite evident that he has a stern view of what it takes to be a true man. We know this as we can see the way the protagonist reacts and acts with other characters. It is also clear that Eddie has stern views on what criteria a person must fit into to be a true man. Through Eddie's language, and the comments he passes against other characters, we can see that Eddie feels as though he is a true man, and he feels that certain other characters just ain't right. As the play commences, we can see Eddie's Sicilian background begins to take action, and the audience can clearly see who the dominating character is. ...read more.

This is shown by when he says, He sings, he cooks, he could make dresses...I can't cook, I can't sing, I can't make dresses, so I'm on the water front. But if I could cook, if I could sing, if I could make dresses, I wouldn't be on the water front. Through this, he is trying to imply that Red Hook is not where he belongs, as it is a place for true men. He says that if he could do all of these things, he would be somewhere else, where hard labour was not needed. Miller adds several occasions where because other characters in the play feel that Rodolpho isn't a proper man, there is a tension build up. For example when Eddie arrives home to see Catherine and Rodolpho coming out of the bedroom, he is shocked and his body fills with aggression. He then kisses Catherine on the mouth. Rodolpho tries to fly an attack at him, but Eddie pins his arms and kisses him too. This shows us that Eddie is trying to, once again, burlesque what he thinks is Rodolpho's homosexuality. This scene has a lot of symbolism and the audience would have reacted to it with shock, and so I am going to discuss this in more detail when I will examine the audience's reaction and the stage directions. On the other hand, we have Marco, the elder of the two brothers, who is more conventionally masculine. This is as he is very much like Eddie; and he fits into his criteria of what it takes to be a real man. Marco is a man who loves his family very much, just like Eddie. We can see this he first speaks to the Carbone family about his family, he tells them that he is in a desperate situation, and he has only made this major sacrifice of leaving his family to come to America to earn money for them; including his son who has tuberculosis. ...read more.

Marco speaks very simply, but says what he wants to say straightforwardly this represents his general character as throughout the play we do not see he speak a lot but we understand his character just as well as the others. His English language is very basic but understandable which backs up the point that Marco is thoughtful, and that he is a man of action, rather than words. Rodolpho on the other hand speaks unnatural exactness. He uses a variety of words and all his words are English but the phrases are not always idiomatic. This is shown to the audience when he first recalls vivid details of his life in Sicily. He describes them with accurate words which give us the impression that he is well-educated. In some cases he also gives poetic comparisons, sown when he compares Catherine to a little bird that has not been allowed to fly. Alfieri is the only character in the play that we see speaks in formal American-English. This is probably as Miller has included him in the play as he said that he wanted to make this play a modern equivalent of classical Greek tragedy. If we look at ancient plays, an essential part or it was that of the chorus. These were a group of figures who would watch the action, comment on it, and address the audience directly. This is basically what Alfieri does. He introduces the action as a retelling of events already in the recent past. By giving details of place, date or time, he enables the action to move swiftly from one episode to another, without the characters having to give this information. This makes the play run much ore smoothly, and more effectively - and if for some reason the audience did not understand what had just happened, Alfieri gives a summary at the end of each act. This is how Miller uses Alfieri's American-English to help in the play, and it also shows us what role he had, apart from being a Lawyer. ...read more.