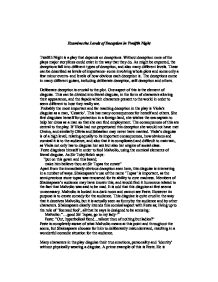 Examine the Levels of Deception in Twelfth Night

Examine the Levels of Deception in Twelfth Night Twelfth Night is a play that depends on deceptions. Without deception none of the plays major storylines could exist in the way that they do. As might be expected, the deceptions fall into different types of deception, and also many different levels. These can be described as levels of importance- some involving whole plots and some only a few minor events- and levels of how obvious each deception is. The deceptions come in many different guises, including deliberate deception, self-deception and others. Deliberate deception is crucial to the plot. One aspect of this is the element of disguise. This can be divided into literal disguise, in the form of characters altering their appearance, and the fa�ade which characters present to the world in order to seem different to how they really are. Probably the most important and far reaching deception in the play is Viola's disguise as a man, 'Cesario'. This has many consequences for herself and others. She first disguises herself for protection in a foreign land, she wishes the sea captain to help her dress as a man so that she can find employment. The consequences of this are central to the play. If Viola had not perpetuated this deception she would not have met Orsino, and similarly Olivia and Sebastian may never have married. ...read more.

This also contains a hint that the 'friendship' between Sir Andrew and Sir Toby is a deception in itself as Sir Toby does not hesitate to use Sir Andrew for entertainment in much the same way as he earlier used Malvolio. There are also hints given that Sir Toby only wants Sir Andrew around for his money; he says, "I have been dear to him, lad, some two thousand strong or so". This is one of the deepest levels of deception in the play. If it is true then the entire friendship of these two characters is based on a deception. This is a serious issue, which contrasts with the comic theme of the play. This deception is never actually specified, only hinted at. Characters in Twelfth Night often deceive other people, but they are just as likely to deceive or delude themselves. Malvolio is a great sufferer of this. He believes himself to be universally popular. Aptly noted by Olivia: "O, you are sick of self love Malvolio" His extreme egotism provides comedy for the audience, and a ground for his deception over the letter, as he also believes mistakenly that Olivia loves him and may marry him. This shows once again his deceptively high opinion of himself; that he thinks he may marry into the upper echelons of society despite being only a steward. ...read more.

Other characters who demonstrate this less than admirable quality include Sebastian when he accepts Olivia's invitation, and Malvolio who selfishly wants higher social status. Sir Toby also lives his life purely for his own pleasure, with alcohol, mischief and enjoyment all forming large parts. Twelfth Night therefore depends upon deception; without deception there would be no play. This is the obvious conclusion to be drawn. However, to state a definite hierarchy of deception would be impossible, as the deceptions are linked, intertwined and interdependent. Many of them relate to the main plot involving Olivia, Orsino, Viola and Sebastian whilst a substantial number of others contribute to the subplot of the gulling of Malvolio. Each 'minor' deception subtly helps lead to the conclusion of the play, and each is therefore important. The most important deception is Viola's disguise as 'Cesario', but after this it becomes harder to distinguish a hierarchy. It is important to realise that there is more to 'Twelfth Night' than originally meets the eye. What is indeed a very comical play also conveys a serious message about human nature, shown through the excesses of its main characters and their deceit. Shakespeare causes the majority of his characters to become deceived but perhaps he also deceives his audience into thinking that the play is merely 'for fun'. The conclusion to be drawn is that deception is the heart of the play, in all its aspects. Joanne Lancaster, 12.8 ...read more.