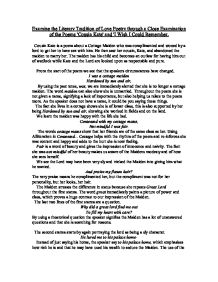 Examine the Literary Tradition of Love Poetry through a Close Examination of the Poems 'Cousin Kate' and 'I Wish I Could Remember.

Examine the Literary Tradition of Love Poetry through a Close Examination of the Poems 'Cousin Kate' and 'I Wish I Could Remember. Cousin Kate is a poem about a Cottage Maiden who was complimented and wooed by a lord to get her to have sex with him. He then saw her cousin, Kate, and abandoned the maiden to marry her. The maiden has his child and becomes an outlaw for having him out of wedlock while Kate and the Lord are looked upon as respectable and pure. From the start of the poem we see that the speakers circumstances have changed. I was a cottage maiden Hardened by sun and air, By using the past tense, was, we are immediately alerted that she is no longer a cottage maiden. The word maiden can also show she is unmarried. Throughout the poem she is not given a name, signifying a lack of importance, but also helping us relate to the poem more. As the speaker does not have a name, it could be you saying those things. The fact she lives in a cottage shows she is of lower class, this is also supported by her being Hardened by sun and air, showing she worked in fields and on the land. We learn the maiden was happy with the life she had. ...read more.

Even so I sit and howl in dust, You sit in gold and sing; This provides a striking contrast between their class and emotion. Howl makes it appear the maiden is unhappy, and she is sitting in dust, so she is very poor. Kate, on the other hand, is sitting in gold, only available to the wealthy, and she is singing, sybolising she is happy and content. Althought the maiden makes out the she loved the lord for his person rather than his status and class, both come up a lot in the poem. This could show how subconciously is does matter to her and how she wants what Kate has with him but she was not strong enough to persue it. You had the stronger wing This metaphor links back to the dove in the second stanza, emphasising the freedom and opeace. The fact Kate was stronger means she could resist the Lord's sexual advances before marriage, where as the maiden could not. Despite this, the Maiden believes that Kate does not love the Lord like she did. O Cousin Kate, My love was true. This again highlights the aspect of them being family and by using the word true we are led to assume that Kates love is not and that the Maiden feels Kate is with him for other reasons. ...read more.

It seemed to mean so little, meant so much; If only now I could recall that touch, The oxymoron shows that at the time it meant nothing, but in hindsight, as said bfore, it meant so much and she wants to recapture every moment, every second. She regrets not doing so very much. We know they are not together now, but there seems to be no sign of bitterness or any hard feelings unlike Cousin Kate where the maiden seems to hold a lot of Bitterness towards the lord and Kate. As she is saying that she can not get those times back we are led to believe that the man may have passed away and that has led to her need for reminiscing. This could be why the need to remember is so strong and why she regrets not savouring every second. The last line sums up the whole feeling of the sonnet. First touch of hand in hand- Did one but know! This seems very ambiguous as the first touch of hand in hand could mean a number of things. It could mean in a sexual way but I believe it is very platonic and could mean shaking hands, and that they were strangers at that special time. The very last section portrays her annoyance with herself again by the use of the explanation mark. Although Cousin Kate and I wish I could remember are both very different and hold a very different mood, they are both about regret and lost love. ...read more.