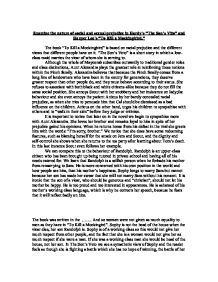 Examine the nature of social and sexual prejudice in Hardy's &quot;The Son's Vito&quot; and Harper Lee's &quot;To Kill a Mockingbird.&quot;

Examine the nature of social and sexual prejudice in Hardy's "The Son's Vito" and Harper Lee's "To Kill a Mockingbird." The book "To Kill a Mockingbird" is based on racial prejudice and the different views that different people have on it. "The Son's Veto" is a short story in which a low-class maid marries the vicar of whom she is serving to. Although the whole of Maycomb subscribes outwardly to traditional gender roles and class distinctions, Aunt Alexandra plays the greatest role in reinforcing these notions within the Finch family. Alexandra believes that because the Finch family comes from a long line of landowners who have been in the county for generations, they deserve greater respect than other people do, and they must behave according to their status. She refuses to associate with both black and white citizens alike because they do not fill the same social position. ...read more.

It is ironic that the son of a vicar, who should be generous and "christian", should not let his mother be happy. He is too proud and too interested in appearances. He is ashamed of his mother's working class language, which is why he corrects her speech, because he fears that it will reflect badly on him. The book was written in the ....... And so women were not given as much equality to men as they have in "To Kill a Mockingird". Sophy is not the head of the house when the vicar dies, her son Randolph is. Sophy is of a working class so this would not give her much respect from other people, and the fact that she is a woman would not give her as much respect if she were a man. If she was a working class man she would be head of the house, not her son. ...read more.

Atticus says that she was the "bravest person I ever knew." She was determined to give up a drug which lessened her pain, and Atticus tells the children that this is an example of real courage, far more than a man with a gun in his hand. The real purpose of Mrs Dubose in the novel is to teach the children the true meaning of courage. I think that Sophy needed courage. With being brought up in a poor family she would have been looked down on and she would have been made to think that she wasn't as good as other people, which is not true. If she had more courage and respect for herself she would have married Sam because it was what she wanted to do, no matter what people thought and if Randolph had more courage he might have tried to explain to his friends that his mother's happiness is more important than the tiny narrow minded views that his "friends" would have of him. ...read more.