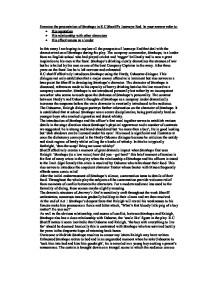 Examine the presentation of Stanhope in R

Examine the presentation of Stanhope in R.C Sheriff's Journeys End. In your answer refer to: * His reputation * His relationship with other characters * His effectiveness as a leader In this essay I am hoping to explore all the prospects of Journeys End that deal with the characterization of Stanhope during the play. The company commander, Stanhope, is a leader from an English school who had played cricket and 'rugger' brilliantly and is now a great inspiration to his men at the front. Stanhope's drinking clearly dramatizes the stresses of war but he is hailed by his men as one of the best Company Captains in the army. After three years on the front line he is left nervous and exhausted. R.C sheriff effectively introduces Stanhope using the Hardy, Osbourne dialogue. This dialogue not only establishes that a major enemy offensive is imminent but also serves as a base point for Sheriff in developing Stanhope's character. The character of Stanhope is discussed, references made to his capacity of heavy drinking but also his line record as a company commander. Stanhope is not introduced personally but rather by an incompetent coworker who seems to touch upon the darkness of Stanhope's personality. ...read more.

The dramatic structure of Journey's End is sensitively craft throughout the work Sheriff orchestrates, numerous tensions gradually build up to their climax and are then resolved. At the end of Act 1 Stanhope's deepest fears that Raleigh will reveal his weaknesses to his fianc�e make him pronounce a fierce and bitter attack, 'What's that bloody little prig of a boy matter? Do you see?' As well as the obvious relationship, and source of conflict, between Stanhope and Raleigh, Stanhope also has a close relationship with Osborne, the 'uncle like' figure in the play. R.C Sheriff makes it seem inevitable that Osborne and Raleigh, 'the boy with everything to live for' should be doomed. Ironically this is contrasted with Stanhope who has survived luckily for years in the desperate hope of returning back home. Overcome with drink Stanhope resolves to censor any letters Raleigh may have written. Exhausted Stanhope retires to bed and in an unguarded moment when he asks Osbourne to 'tuck him into bed and kiss him goodnight', he is revealed as a young boy seeking a parent's reassurance. The curtain is brought down on a tranquil scene in which the audience can see the lights twinkling off stage, and symbolically Osbourne winding his watch; this signifies the passing of time. ...read more.