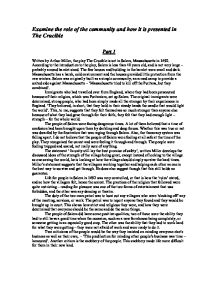 Examine the role of the community and how it is presented in The Crucible Part 1 Written by Arthur Miller, the play The Crucible is set in Salem, Massachusetts in 1692. According to the introduction to the play, Salem is less than 40 years old, and is not very large - probably around hamlet sized. The few houses and building in the hamlet were small and dark. Massachusetts has a harsh, cold environment and the houses provided little protection from the raw winters. Salem was originally built as a simple community; an armed camp to provide a united side against Massachusetts - 'Massachusetts tried to kill off the Puritans, but they combined'. Immigrants who had travelled over from England, where they had been persecuted because of their religion, which was Puritanism, set up Salem. The original immigrants were determined, strong people, who had been simply made all the stronger by their experiences in England. 'They believed, in short, that they held in their steady hands the candle that would light the world'. This, to me, suggests that they felt themselves so much stronger than anyone else because of what they had gone through for their faith; they felt that they had enough light - strength - for the whole world. The people of Salem were facing dangerous times. A lot of them believed that a time of confusion had been brought upon them by darkling and deep forces. Whether this was true or not was dwarfed by the frustration that was raging through Salem. Also, the theocracy system was falling apart. I do not believe that the people of Salem were feeling at all safe at the time of the play. They recognized the unrest and were feeling it through and through. The people were feeling trapped and scared, not really sure of anything. The statement ' In unity still lay the best promise of safety', written Miller develops the discussed ideas of the strength of the village being great, except instead of ...read more.

While 'working' in the community on their own, many individuals play a large part in the occurrences; changing events with single words or actions. During the play, I think Miller is thinking about how big a difference a single person can have on many - such as Abigail does on the whole community of Salem. Some members of Salem are quite heavily involved in all the events throughout the play and yet others manage to take a much more back row view. Whether it is the more active individuals that move events along single-handily or the whole community powering events is part of the issue. Individuals that Miller has developed as part of the community but that are heavily pressured or influenced by the people around them is another side to the issue. An example of one of such people is Abigail. Despite the fact that she started all the fuss in the first place, and therefore you would perhaps expect that she pressurised rather than someone who was pressured herself, she is under a lot of influence. Abigail was under pressure to keep her secrets, the truth, to herself because she knew how much trouble she was going to be in - probably hanged - if she confessed. Another person under influence from the community was Mary Warren, Proctors servant. She was unable to stand up for herself and during the trials simply followed on to the actions of the others; copied what they said and did. This was shameful in a way; although it was just the way she was, her personality was a weak and confused one. The other girls in the community, in the trials, were the ones that influenced and pressurised Mary. They made her feel that she has to follow them and do what they did. Parris is definitely under pressure from the community, but this is different as it comes from himself - he feels strongly pressured by the people Salem. ...read more.

The different classes are shown by the way you have the poor farmers and their wives - Sarah Good and Goody Osborn are two examples here. You then have the slave, Tituba being one example, in fact the only slave we hear about. You then have of course the people who hold the slaves - Putnam and the Judges, as well as Parris are all thought to be quite rich and landowners. Putnam's wealth comes across near the beginning of the play, so it is soon easy to appreciate the community feel. This use of the wide range of people is a dramatical technique, which Miller employs to make the play work - without the convincing sense of the community, the play would be a lot less than it is. The events that occur throughout the play add to and show off the sense of a community. One of these such events is the knife which is stuck into Parris' front door - if you were not living in a community, no one would know you well enough to both want to scare you for some reason and also to know that you would be frightened by the presence of it. A second example of an incident that occurs in the play version of The Crucible is the argument that happens near to the beginning of the play, between Proctor and Putnam over the land. An argument of this kind could only really happen in a community where the habitants have been there long enough to call on their grandparents wills as proof of something, and for others to know other facts about the people such as 'Your grandfather had a habit of willing land that never belonged to him, if I may say it plain.' In the film version of the play, there are additional scenes. One of these is another incident when something happens in the community, namely when something has fallen off a wagon passing through and someone is accused, I believe of stealing it off of the wagon. ...read more.