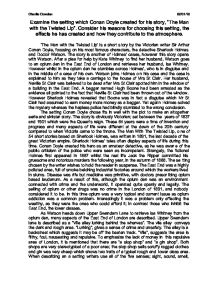 Examine The Setting Created By Conan Doyle For His Story &quot;The Man With The Twisted Lip&quot;

Examine the setting which Conan Doyle created for his story, "The Man with the Twisted Lip". Consider his reasons for choosing this setting, the effects he has created and how they contribute to the atmosphere. 'The Man with the Twisted Lip' is a short story by the Victorian writer Sir Arthur Conan Doyle, focusing on his most famous characters, the detective Sherlock Holmes and Doctor Watson. The story is another of Holmes' cases, however this story opens with Watson. After a plea for help by Kate Whitney to find her husband, Watson goes to an opium den in the East End of London and retrieves her husband, Isa Whitney. However whilst in the opium den he stumbles across Holmes', who is in disguise and in the middle of a case of his own. Watson joins Holmes on his case and the case is explained to him as they take a carriage to the house of Mrs St Clair. Her husband, Neville St Clair was believed to be dead after Mrs St Clair spotted him in the window of a building in the East End. A beggar named Hugh Boone had been arrested as the evidence all pointed to the fact that Neville St Clair had been thrown out of the window. However Sherlock Holmes revealed that Boone was in fact a disguise which Mr St Clair had assumed to earn money more money as a beggar. ...read more.

The sounds of Upper Swandam lane are then emphasized in such examples as "Holmes' shrill whistle" and "the clink of hooves". These alarming noises help to convey the eerie atmosphere because they are so unnoticeable and startling in an area which is mostly silent and shadowy. The rich people of the Victorian era would tend to remain quiet and proper while the ruffians of the area are loud and often drunk and riotous. The depressing nature of the area is then presented as "an endless succession of sombre and deserted streets". This suggests a very monotonous area with nothing standing out and everything dark and moody. A few years earlier Jack the Ripper was at work and the people here are still tense, filled with horrific memories of the past. Next Conan Doyle describes the River Thames, which although it was the heart of London's East End and provided some form of employment for many, was a "murky river" moving along "sluggishly". The river at that time was very polluted and foul. The words "murky" and "sluggishly" reflect the dirtiness of the area and give the effect of describing the river as a gluey, viscous liquid. As Watson enters the "The Bar Of Gold", the attention then turns to the many sights, sounds and smells in the opium den. The entrance to the den is described as "a steep flight of steps down to a black gap". ...read more.

The story opens in Watson's house and "armchair", "needlework" and "cheery sitting room" gives the impression of a warm and relaxed room. It is very late and Watson is getting ready to sleep, or to be more precise "the hour when a man gives his first yawn". The comforting civilization is the opposite to where Watson is heading next. When Holmes solves the case, he takes himself away from Victorian England and into a more exotic place, like he is meditating. The "eastern divan" and the pipe making "blue smoke" makes the atmosphere relaxed and mystical; as he finally comes to realise the fate of Neville St Clair. The setting chosen by Conan Doyle very much suited the era in which the story was written; the East End and opium dens was a topical and current news issue then especially due to the recent crimes of Jack the Ripper. In all I think that the setting was good and the contrast between the St Clair's "large villa" and the unsettling description of Upper Swandam Lane and 'The Bar Of Gold' worked well to emphasise the difference between the civilization and comfort that Neville St Clair was used to- and the completely different life he led as Hugh Boone. It's quite ironic that someone as rich and smart as that would transform into the lowliest person in the poorest part of London to earn more money. But as always it is Sherlock Holmes who solves the case. Charlie Dowden 02/01/10 Charlie Dowden 02/01/10 ...read more.