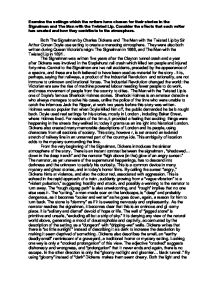 Examine the settings which the writers have chosen for their stories in the Signalman and The Man with the Twisted Lip. Consider the effects that each writer has created and how they contribute to the atmosphere.

Examine the settings which the writers have chosen for their stories in the Signalman and The Man with the Twisted Lip. Consider the effects that each writer has created and how they contribute to the atmosphere. Both The Signalman by Charles Dickens and The Man with the Twisted Lip by Sir Arthur Conan Doyle use setting to create a menacing atmosphere. They were also both written during Queen Victoria's reign: The Signalman in 1866, and The Man with the Twisted Lip in 1891. The Signalman was written five years after the Clayton tunnel crash and a year after Dickens was involved in the Staplehurst rail crash which killed ten people and injured forty-nine. Central to the Signalman are two rail accidents, preceded by the appearance of a spectre, and these are both believed to have been used as material for the story. It is, perhaps, saying that railways, a product of the Industrial Revolution and rationality, are not immune to unknown and irrational forces. The Industrial Revolution changed the world: the Victorian era saw the rise of machine powered labour needing fewer people to do work, and mass movement of people from the country to cities. The Man with the Twisted Lip is one of Doyle's famous Sherlock Holmes stories. Sherlock Holmes is an amateur detective who always manages to solve his cases, unlike the police of the time who were unable to catch the infamous Jack the Ripper, at work two years before this story was written. ...read more.

Swandam Lane is a "vile alley lurking" near the wharves somewhere in the East End, the poorest part of London. "Vile" suggests a repulsive atmosphere and "alley" a dark, fetid passageway. The personification of "lurking" makes it seem either ashamed, or lying in wait, about to attack. The "slop shop" and "gin shop" are an indication of the poverty of the area. A slop shop was a place where ready-made clothing was sold which no respectable Victorian person would wear. The gin shop implies drunkenness and possible violence, as well as reinforcing the poverty of the area: gin was drunk by most working class people. It is dark, apart from the "two golden tunnels of yellow light" from a cart. "Golden" suggests something precious and "tunnels" some form of escape. Few sounds penetrate the gloom. The policeman's "footfall" is one, as a policeman would be needed in such a place, probably to subdue the shouting "revellers." These noises serve to heighten the silence around, suggesting that no one wants to stay there long. The "murky river" moves "sluggishly," murky suggesting debris hidden beneath the surface, and the adverb "sluggishly" gives the river the same lazy characteristics of the inhabitants of the area, or the middle- and upper-class view of them, as until recently they were the only people able to read. ...read more.

This is the essence of the human fear of darkness, used to great effect in much fiction: that there may be something near that could attack, and we cannot see it to defend ourselves. Sight is not the only sense used to describe the settings. The Signalman includes the feeling of damp on the wall and the cutting, and in a way, the so-called 'sixth sense' to feel the supernatural. The Man with the Twisted Lip incorporates sound and smell in the "clink of horse's hooves" and the "fumes." This more fully creates the desired atmosphere, as it is easier for the reader to imagine themselves in the setting. The Man with the Twisted Lip is set somewhere identifiable; although Upper-Swandam Lane itself did not exist, many readers would be familiar with similar places, and would be living in places like Neville St. Clair's house in Kent. Doyle also mentions the real counties of Surrey and Middlesex on the way to The Cedars. The setting of the Signalman is not named; the reader only knows it is a stretch of railway line, presumably somewhere in the countryside. This is in a way similar to Swandam Lane- it is a fictional but nevertheless very real place, and there were (and still are) railways running through dismal stretches of countryside. Dickens and Doyle have chosen their settings carefully to create the appropriate atmosphere of tension, foreboding and menace. This pathetic fallacy draws the reader in and adds to the interest of the story. ...read more.