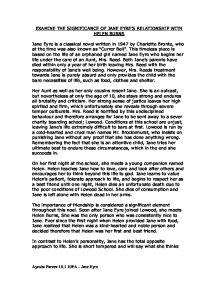 EXAMINE THE SIGNIFICANCE OF JANE EYRE'S RELATIONSHIP WITH HELEN BURNS

EXAMINE THE SIGNIFICANCE OF JANE EYRE'S RELATIONSHIP WITH HELEN BURNS Jane Eyre is a classical novel written in 1947 by Charlotte Bronte, who at the time was also known as "Currer Bell". This timeless piece is based on the life of an orphaned girl named Jane Eyre who begins her life under the care of an Aunt, Mrs. Reed. Both Jane's parents have died within only a year of her birth leaving Mrs. Reed with the responsibility of Jane's well being. However, Mrs. Reeds treatment towards Jane is purely absurd and only provides the child with the bare necessities of life, such as food, clothes and shelter. Her Aunt as well as her only cousins resent Jane. She is an outcast, but nevertheless at only the age of 10, she stays strong and endures all brutality and criticism. Her strong sense of justice leaves her high spirited and firm, which unfortunately she reveals through severe temper outbursts. Mrs. Reed is horrified by this undisciplined behaviour and therefore arranges for Jane to be sent away to a sever charity boarding school; Lowood. Conditions at this school are unjust, leaving Jane's life extremely difficult to bare at first. Lowood is run by a cold-hearted and cruel man names Mr. Brocklehurst, who insists on punishing Jane without any proof that she has done anything wrong. Remembering the fact that she is an attentive child, Jane tries her ultimate best to endure these circumstances, which in the end she succeeds in. On her first night at the school, she meets a young companion named Helen. Helen teaches Jane how to love, care and look after others and encourages her to think beyond this life to god. Jane learns to value Helen's patient, tolerate approach to life, and begins to respect her as a best friend until one night, Helen dies an unfortunate death due to the poor conditions of Lowood School. ...read more.

By making Helen die such a moving death, leaves the reader feeling sorry for her departure, as well as creating more emotion for Jane aswell. Jane's only true companion has now left her and Jane is left all alone. Helen is young, bright and attentive and unfortunately knows that she is going to die. Surprisingly, Helen has learnt how to accept death with tremendous ease. " 'I believe; I have faith. I am going to god.' 'Where is god? What is god?' 'My maker and yours, who will never destroy what he created. I rely implicitly on his power, and confide, wholly in his goodness: I count the hours till that eventful one arrives which shall restore me to him, reveal him to me.' " I Helen's view, she is certain that she will go to heaven after her death. She believes everyone will go to a better place; therefore that is why she accepts suffering. Helen takes on all the grief and hurt in life in hope that there is a place waiting for her and others, which will repay them of all the pain they have suffered in their previous life. She has faith in god, and this is the main factor of why she accepts death so easily. Jane shows her affection and gratitude toward Helen in various ways throughout her life in the novel. As Helen lays on her deathbed breathing her last breaths, Jane remains bolted to her side, giving her courage and support right until the very end of Helen's life. Despite the fact that she is only a ten-year-old child, who stereotypically would not have had a care in the world, Jane had enough maturity to show her affection and care. This shows that Helen must have had a tremendous impact on Jane's life and Helen obviously meant a great deal to Jane. Jane continues to show her love towards Helen later on in life aswell. ...read more.

Although Helen would have been the ideal nineteenth century woman in many cases, one thing about her character would have been frowned upon: the fact that she was an intelligent young lady. Helen was always seen as studious and hard working but this was not always admired in a nineteenth century woman. This is mainly because people feared a woman not stereotypically toeing the line and they felt education progressed but poisoned the mind; made women more strong-minded and independent; a lot like Jane's behaviour, which was disapproved of my the audience back then. Charlotte Bronte has produced this novel to great success by dealing with different factors, which can relate to a wide range of audiences. Her two main characters, Jane and Helen, are both created to have opposing personalities. This is done to create tension and interest throughout the story. In my opinion, I think that the attitude of Helen is rather unacceptable. I say this because Helen accepts everything she is faced with-especially punishment whereas Jane believes I justice and sticking up for her views. It may be said that I agree with Jane's behaviour because of the fact that times and views have changed and people nowadays believe in equality and sticking up for oneself. However, Helen's behaviour is very significant throughout the novel. This is because she has a very strong effect on Jane. Helen acts as a counterbalance to Jane as she balances out her life and gives her things that she was deprived of. Before she went to Lowood, she had no friends or companions, however as soon as Jane arrives at Lowood, Helen offers her her friendship. She is Jane's ally. Helen introduces the concept of religious sacrifice throughout the novel. She has extremely strong beliefs about Christianity and bases her opinions on the Bible. She believes that we should sacrifice our life for god and her strong beliefs on this matter make an impact on Jane's attitude to life, making her a better person. Ayesha Parvez 10.1 10FA - Jane Eyre ...read more.