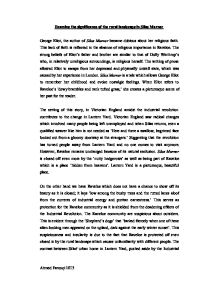 Examine the significance of the rural landscape in Silas Marner George Eliot, the author of Silas Marner became dubious about her religious faith. This lack of faith is reflected in the absence of religious importance in Raveloe. The strong beliefs of Eliot's father and brother are similar to that of Dolly Winthrop's who, in relatively unreligious surroundings, is religious herself. The writing of prose allowed Eliot to escape from her depressed and physically unwell state, which was caused by her experience in London. Silas Marner is a tale which allows George Eliot to remember her childhood and evoke nostalgic feelings. When Eliot refers to Raveloe's 'dewy brambles and rank tufted grass,' she creates a picturesque scene of her past for the reader. The setting of this story, in Victorian England amidst the industrial revolution contributes to the change in Lantern Yard. Victorian England saw radical changes which involved many people being left unemployed and when Silas returns, even a qualified weaver like him is not needed as 'Here and there a swallow, begrimed face looked out from a gloomy doorway at the strangers.' ...read more.

However, when Silas Marner returns with Eppie, he finds Lantern Yard with 'large factories' due to the effects of the industrial revolution. A town which was once a pastoral and picturesque town has now transformed into a 'great manufacturing town' which now does not see the people it use to and the 'gloomy' doorways and 'begrimed' faces mirrored Silas's feelings. The community of Lantern Yard left isolated and trapped could not resist the revolution that could not lay a finger on Raveloe. Here we see the transformation of Lantern Yard and the sameness of Raveloe due to its natural seclusion which has also alienated the Raveloe population from outsiders. This lack of socialization and enclosure is shown in Dolly Winthrop who is uneducated however, she is very religious which differs to the other characters in Raveloe who are not that religious. Their lack of adherence to religious principals derives from their seclusion by the rural landscape, as England was being swept by puritanical beliefs at this time. Yet Raveloe is saved from such extremities. ...read more.

Eppie acts as medicine for Silas Marner. The arrival of her diverts Silas' attention away from his loom to her. When Eppie crawls into Silas' cottage, she is foreshadowing the return of Silas's gold which was stolen by Dunstan Cass. The shimmering gold hair of Eppie could be seen through Silas' blurry vision. As we see later, Silas Marner's gold does come back to him from Godfrey Cass who is the real father of Eppie. The development of the garden and flowers symbolise Silas' growth and his change in mood, as the 'flowers shone with answering gladness' The realism in George Eliot's scenery is quiet formidable. This is important because George Eliot shapes her characters' feelings and moods using the rural scenery. It is done exquisitely in Silas Marner in different when George Eliot portrays Silas Marner in different ways as-well-as letting the reader know about his feelings and emotions. This is done through the aid of the rural landscape which is described by George Eliot so well the reader can picture everything vividly in their minds which helps understand the novel. Eppie's garden is a prime example 'with stones on two sides, but in front there was an open fence, through which the flowers shone'. Ahmed Farooqi 10T5 ...read more.