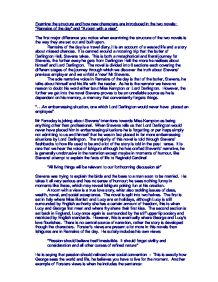 Examine the structure and how new characters are introduced in the two novels: &quot;Remains of the day&quot; and &quot;A room with a view&quot;.

Examine the structure and how new characters are introduced in the two novels: "Remains of the day" and "A room with a view" The first major difference you notice when examining the structure of the two novels is the way they are set out and built upon. Remains of the day is a travel diary, it is an account of a wasted life and a story about missed chances. It is centred around a motoring trip that the butler of Darlington Hall, Stevens takes. This is both a metaphorical and literal journey for Stevens, the further away he gets from Darlington Hall the more he realises about himself and Lord Darlington. The novel is divided into 8 sections each covering the different stages of the journey through which we discover the truth about Stevens' previous employer and we unfold a 'new' Mr Stevens. The sole narrative voice in Remains of the day is that of the butler, Stevens, he talks about himself and his life with the reader. As he is the narrator we have no reason to doubt his word either bout Miss Kempton or Lord Darlington. However, the further we get into the novel Stevens proves to be an unreliable source as he is dependent on his memory, a memory that conveniently forgets things. ". . .An embarrassing situation, one which Lord Darlington would never have placed an employee" Mr Farraday is joking about Stevens' intentions towards Miss Kempton as being anything other than professional. ...read more.

He interprets the letter, as her wanting to return to Darlington Hall, but later finds out this wasn't the case at all. On one occasion Stevens remembers her reaction when he told her that under Lord Darlington's orders two maids were to be dismissed because they were Jewish, Miss Kempton says: "I am warning you Mr Stevens I will not continue to work in such a house . . . if my girls are dismissed I will leave also" She is emotional without being excessively sentimental. She shows her feelings on the matter and so has an identity and purpose other than work. There are indications right through the book that she has feelings for Mr Stevens, she is blind to the fact that Stevens is driven by the desire to be a perfect butler. Miss Kempton also has a immature almost childish side to her personality, like when she is courting Mr Benn with the hope to make Stevens jealous. When he sees it as a professional loss she allows her sorrow and fury to get the better of her and leaves Darlington Hall to get married to Mr Benn. Even at the end of the novel she still has feelings for Stevens "I get thinking about a life I might have had with you Mr Stevens" It shows the depth of her love and her sorrow for what has been lost. Miss Kempton is a key figure for what she reveals about Stevens and in her own right. ...read more.

. . he took malicious pleasure in thwarting people" Cecil took pleasure in seeing people upset, him and Lucy have completely different angles on life. Cecil's rigidity is shown in his kiss, he sees it as more of a formality, it is clumsy and unpleasant. To conclude Remains of the day and A room with a view both tackle the same issues such as class, status and travel. However the way in which the author deals with them and structures the novel around them is individual. There are many characters in both novels that represent the same personalities: George and Mr Farraday represent all that is different, they offer the reader of the modern day something that they can relate to, that life wasn't all about the stiff upper lip, people can make their own decisions. Cecil and Lord Darlington represent the English standards, they live their lives in accordance with the "proper" moral ways, and never experience or make their own mind on about life. To a certain extent this is where Stevens and Lucy would have fitted in - Stevens lived his life with accordance to how Lord Darlington would have liked, it isn't until the end of the novel that he decides he wants to live a little. Lucy likewise was following the path that her mother, cousins and Miss Bartlett would have wanted. She isn't showing her true feelings about life or George because she was afraid of being different, however she escapes the life that was set out for her and becomes truly happy. ...read more.