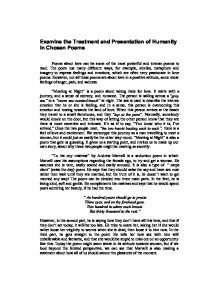 Examine the Treatment and Presentation of Humanity in Chosen Poems

Examine the Treatment and Presentation of Humanity in Chosen Poems Poems about love can be some of the most powerful and intense poems to read. The poets use many different ways, for example, similes, metaphors and imagery to express feelings and emotions, which are often very passionate in love poems. However, not all these poems are about love in a positive attitude, some show feelings of anger, pain, and sadness. "Meeting at Night" is a poem about taking risks for love. It starts with a journey, and a sense of secrecy, and romance. The person is sailing across a "grey sea" to a "warm sea-scented beach" at night. The sea is used to describe the intense emotion that he or she is feeling, and in a sense, this person is overcoming this emotion and rowing towards the land of love. When this person arrives at the beach they travel to a small farmhouse, and they "tap at the pane". Normally, somebody would knock on the door, but this way of letting the other person know that they are there is more secretive and intimate. It's as if to say, "You know who it is, I've arrived." Once the two people meet, "the two hearts beating each to each", there is a feel of love and excitement. We stereotype this journey as a man travelling to meet a woman, but it could just as easily be the other way round. ...read more.

He is so insecure he thinks that killing her is the only way to stop her from leaving him. "Villegiature" is a poem with a funny, unexpected ending. It is very real to many modern day relationships and although tragic, extremely typical to what we as a society have become-obsessed with work, forgetting about what is really important in life. The speaker in the poem is having a dream of a man she once knew, and probably loved very much. The man though, is very far away and obsessed with books so much that he doesn't notice her and doesn't care about her. However, in the dream, this man climbs threw her window and kisses her. It is very romantic and she is lost in the fantasy of the moment almost forgetting that she does not love this man anymore. As soon as the ghost leaves, she remembers how he used to treat her, and how boring he was. The ghost of the man is a wish fulfilment dream and the kissing is very symbolic. The kiss is where emotion meets sex. It is emotional and erotic. It is saying, in a way, that sometimes we meet people who we feel strongly about at first, but when we get to know them, we realise that they are not what we expected, so we leave them. After a while we begin to remember all the good things we liked about them. ...read more.

Someone would have to work for Nike for 45,000 years, just to earn as much as Michael Jordan did in 1991 for advertising alone. "The Ballad Of Reading Gaol" is a poem about death row, and a sadistic and twisted way of doing things. A man was arrested for being gay, which in itself is totally wrong, and not only was this man arrested because of his sexuality, he was going to be killed for it too. The wardens watched his every movement and he was even escorted by two guards during exercise. The only reason for this was because they did not want him to kill himself. They would not allow this man to kill himself and at least keep his dignity, because they wanted the satisfaction of doing it themselves. If they really just wanted the man dead, they would not mind how it happened and they would do it as soon as possible, but they wanted to feel powerful. They wanted the man to know that they had control over his life; they chose when he died and how he died. They wanted to feel proud of themselves, but how can anyone possibly be proud of killing someone who has not done anything wrong? "With yawning mouth the yellow hole Gaped for a living thing; The very mud cried out for blood To the thirsty asphalt ring; And we knew that re one dawn grew fair Some prisoner had to swing." ...read more.