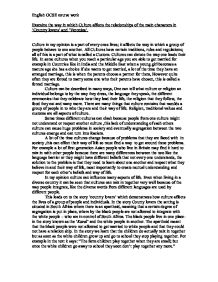 Examine the way in which Culture affects the relationships of the main characters in 'Country lovers' and 'Veronica'.

Examine the way in which Culture affects the relationships of the main characters in 'Country lovers' and 'Veronica'. Culture in my opinion is a part of every ones lives; it affects the way in which a group of people behave to one another. All Cultures have certain traditions, rules and regulations; all of this is a part of what is called a Custom. Cultures can dictate the way one leads their life. In some cultures when you reach a particular age you are able to get married for example in Countries like in India and the Middle East when a young girl becomes a mature age she has a choice if she wants to get married, a lot of the time they have an arranged marriage, this is when the parents choose a partner for them, However quite often they are forced to marry some one who their parents have chosen, this is called a forced marriage. Culture can be described in many ways, One can tell what culture or religion an individual belongs to by the way they dress, the language they speak, the different ceremonies that they celebrate how they lead their life, the religion that they follow, the food they eat and many more. There are many things that culture contains that moulds a group of people in to who they are and their way of life. Religion, traditional values and customs are all aspects of culture. Some times different cultures can clash because people from one culture might not understand or respect another culture ,this lack of understanding of each others culture can cause huge problems in society and eventually segregation between the two cultures emerge and can turn into Racism. A lot of the time cultures change because of problems that they are faced with in society ,this can effect their way of life so must find a way to get around these problems. ...read more.

This shows that he is generous because he gives Thebedi presents and despite what happens at school he still manages to bring home a present for Thebedi. I think after when Thebedi and Paulus make love, Paulus is always ordering her where they should meet next to have sex. This shows that he is also dominant and that he is very authoritative because he orders her where to meet next and she cannot really say anything to that. Thebedi's character is different she asks paulus questions about school and she listens to what he has to say. I think that she is modest in the way that she dresses, in the text it says: "her dress bunched up modestly tucked into her pants." This tells us that the way she dresses is modest and isn't very revealing. I think that she is quite helpful because she sometimes helps out in the farm house but she is not very chaste because she doesn't care about when they first make love and she doesn't say any thing about when they keep on doing it, this shows that she doesn't mind what is happening between them and doesn't really want to stop meeting Paulus , when they are at the river side they are sitting down together under a tree on a hot summers day and they have something emotional going on between them: " he could see in her dark face that was part of the shade ,with her big dark eyes shiny as soft water ,watching him attentively." This shows that she isn't very chaste not dutiful. Veronica's character differs from Thebedi's character because veronica is much more hard working and is more mature and responsible than Thebedi, veronica plays an important role in her family and adapts a very grown up attitude because she is the responsible one. Veronica shows that she has an interest in the outside world and is always asking okeke questions about school and what he wants to be when he grows up. ...read more.

Culture affected their relationship because they both knew about their culture and that the Apartheid was the root cause of their secret relationship. I think because their relationship transformed into an intimate one, they both decided it was acceptable so long as no one knows. Unlike 'the country lovers' the aspect of culture that affects Veronica's and Okeke's relationship is that Veronica has to look after the family has a responsibility over them. She could have got an education to then lead a better life, she has no hope and thinks that it's her fate to stay at home and look after the family. The culture affected their relationship because if veronica wasn't beaten and ill treated at home and if she had an education then Okeke wouldn't have had to be concerned about her future. I think in the culture ,the women have the responsibility to In the 'Veronica' it shows that the village where they live is very poor and the people live in small huts, this suggests that the way she is living causes her to believe that this is her fate and no one can do any thing about it. Reading through both of the stories, one can say that culture is a big aspect of life and the main characters in both stories are affected by it. This shows that what ever culture an individual comes from, it influences the way they act and the way they are towards each other. This can be found in both of the stories because we learn in 'the country lovers' that due to the strict laws being implemented it causes Paulus and Thebedi to have a secret relationship and in 'Veronica 'culture effects her because she feels its her duty to look after her family, this makes her think that it is her only way forward and its her ultimate destiny. ?? ?? ?? ?? English GCSE course work ...read more.