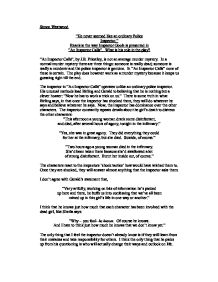 Examine the way Inspector Goole is presented in &quot;An Inspector Calls&quot;. What is his role in the play?

Simon Westwood "He never seemed like an ordinary Police Inspector." Examine the way Inspector Goole is presented in "An Inspector Calls". What is his role in the play? "An Inspector Calls", by J.B. Priestley, is not an average murder mystery. In a normal murder mystery there are three things: someone is really dead; someone is really a murderer and the police inspector is genuine. In "An Inspector Calls" none of these is certain. The play does however work as a murder mystery because it keeps us guessing right till the end. The inspector in "An Inspector Calls" operates unlike an ordinary police inspector. His unusual methods lead Birling and Gerald to believing that he is nothing but a clever hoaxer: "Now he has to work a trick on us." There is some truth in what Birling says, in that once the inspector has shocked them, they will do whatever he says and believe whatever he says. Now, the inspector has dominance over the other characters. The inspector constantly repeats details about the girl's death to distress the other characters: "This afternoon a young woman drank some disinfectant, and died, after several hours of agony, tonight in the infirmary." "Yes, she was in great agony. They did everything they could for her at the infirmary, but she died. Suicide, of course." "Two hours ago a young woman died in the infirmary. She'd been taken there because she'd swallowed a lot of strong disinfectant. ...read more.

He is determined to deliver his moral message. "You see, we have to share something. If there's nothing else, we'll have to share our guilt. These are perfect examples of when the inspector is pointing out that we are all responsible for each other. There are certain factors that steer my thoughts into believing that the inspector isn't just an ordinary inspector determined to hound his quarry. Others see him as a religious figure, not Christ, but a conscience. Or even just a hoaxer. I actually feel that the inspector is a conscience figure that has come to teach them all to take responsibility for others. At one point in the play Gerald questions whether he is just a 'clever hoaxer', but I actually feel that there is a hint of supernatural about Inspector Goole, and that he is trying to tell them what will happen if they do not learn from their mistakes. One thing that suggests how strange the inspector is, is his time of arrival. The inspector arrives at the house shortly after Birling's 'every man for himself' speech, and what seems strange is that the inspector's last speech is directly disproving Birling's speech. The inspector's speech about being 'members of one body' is blatantly intended to contradict what Birling had said before he arrived, which seems a bit supernatural. There are other things that seem supernatural about the inspector, such as the way he leaves, and especially, what he seems to already know. ...read more.

This enables the pace to stay fast throughout the play. This manages to keep the audience interested, and constantly wondering and thinking about the outcome. We are constantly on the edge of our seats, trying to guess what will happen next and how each of the characters are involved. We also begin to wonder how real Inspector Goole actually is. Priestley also makes extensive use of irony. At the beginning of the play, Birling discusses his future position with Gerald: "There's a fair chance that I might find my way into the next honours list. Just a knighthood, of course!" The inspector's arrival and purpose of his visit make Birling's earlier statement ironic. After the inspector has seen the family about the incident, it's quite certain that Birling will not be receiving his knighthood, especially if it gets into the media. Birling would lose respect and maybe even money due to the inspector's news of the death, and the amount that the family had to do with it. Their reputations will be ruined. I believe the statement, "He never like an ordinary police inspector" is true. The inspector is definitely not presented in an 'ordinary' way. I feel the inspector has been used to convey a moral message to the characters, and this is done successfully by J.B. Priestley. Some characters did learn from their mistakes, but since everyone did not change their approach to life, the death really had to happen, to make them pay the price. Because of his role, Inspector Goole can never be considered as ordinary. ...read more.