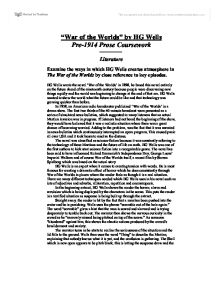 Examine the ways in which HG Wells creates atmosphere in The War of the Worlds by close reference to key episodes.

"War of the Worlds" by HG Wells Pre-1914 Prose Coursework Literature Examine the ways in which HG Wells creates atmosphere in The War of the Worlds by close reference to key episodes. HG Wells wrote the novel 'War of the Worlds' in 1898, he based this novel entirely on the future ahead of the nineteenth century because people were discovering new things rapidly and the world was beginning to change at the end of that era. HG Wells wanted to show the world what the future could be like and that technology was growing quicker than before. In 1938, an American radio broadcaster publicized 'War of the Worlds' in a drama show. The first two thirds of the 60-minute broadcast were presented as a series of simulated news bulletins, which suggested to many listeners that an actual Martian invasion was in progress. If listeners had not heard the beginning of the show, they would have believed that it was a realistic situation where there was a great chance of becoming worried. Adding to the problem, was the fact that it was narrated in news bulletins which continuously interrupted an opera program, This caused panic all over USA and it took hours to resolve the distress. The novel was classified as science-fiction because it was constantly referring to the technology of these Martians and the future of life on earth. HG Wells was one of the first authors to kick start science fiction into a recognizable genre. The novel has been said to have influenced Roland Emmerich's Independence Day, George Lucas' Imperial Walkers and of course War of the Worlds itself, a recent film by Steven Spielberg which was based on the actual story HG Wells is an expert when it comes to creating tension with words. ...read more.

Wells uses the word "blundered" again to show panic and shock as blundering is often something which you do when it is disorganized and chaotic. Wells then describes how the urgent situation is progressing; "The water was in a tumult about me, and rapidly growing hotter" this means that he cannot stay for long and it is inevitable that he will have to pop up for air, revealing himself to the tripods. In the next paragraph, Wells builds up the tension when he finally makes eye contact with the Martians again. He does this by saying "take breath and throw the hair and water from my eyes, the steam was rising in a whirling white fog that at first hid the Martians altogether." He builds up the tension so the reader is eager to continue, and it creates more drama when the aliens are finally described. Wells uses the word 'colossal' to describe the sheer enormity of these machines and then describes how one of them was destroyed during the raid by saying "two were stooping over the frothing, tumultuous ruins of their comrade." The description shows disgust and revulsion as this gives a more unusual, alien feel to it. Next, he explains the mechanisms attached to the tripods as generators of 'heat-rays' this relates to the technology that was introduced at the time, as x-rays were discovered and some people were unsure of the concept. Wells scared those people by using 'heat rays' as a weapon of mass destruction in his book. In the same paragraph, Wells uses the word 'hissing'; hissing is an onomatopoeic word often associated with snakes and it scares the reader because the word is unpleasant. ...read more.

At the end of that paragraph, he also describes how it was actually bacteria, the smallest thing which destroyed the aliens. In the last paragraph of this extract, H G Wells sums up the dramatic downturn effect the aliens had, he also mentions how humans evolved to adapt to viruses and disease; "we have developed resisting power" Proving that the aliens would not have survived as they had not developed any resistance. Then Wells describes how the germs helped us in this war by saying "our microscopic allies" this shows how without these germs, we would have been doomed. Another point is brought out when wells says "By the toll of a billion deaths man has bought his birthright to the earth," The first part of the quote shows how advanced and overpowering these Martians were as they had killed 1 billion people, and the second part shows how these deaths have actually strengthened our confidence and created an official birthright. The last sentence of the extract is quite short, yet very meaningful, "For neither do men live nor die in vain." This shows how every man has a purpose to survive on the earth, to pass on genes to evolve. To conclude, Wells creates many different types of atmosphere, with dramatic changes. The tension created is purposeful as it is used throughout these extracts. The way H G Wells creates this atmosphere is unique and powerful because he shows reactions in other people which affect his feelings. I believed War of the Worlds was a very interesting story. I feel Wells wanted to show a possible sign for the future, to try and give the people some vague idea as inventions and new discoveries were starting to develop. He also showed that there will always be hope even when you think you have no chance. ...read more.