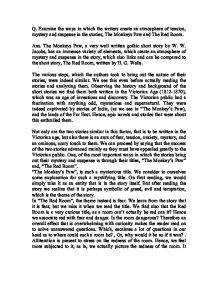 Examine the ways in which the writers create an atmosphere of tension, mystery and suspense in the stories, The Monkeys Paw and The Red Room.

Q. Examine the ways in which the writers create an atmosphere of tension, mystery and suspense in the stories, The Monkeys Paw and The Red Room. Ans. The Monkeys Paw, a very well written gothic short story by W. W. Jacobs, has an immense variety of elements, which create an atmosphere of mystery and suspense in the story, which also links and can be compared to the short story, The Red Room, written by H. G. Wells. The various steps, which the authors took to bring out the nature of their stories, were indeed similar. We see this even before actually reading the stories and analyzing them. Observing the history and background of the short stories we find them both written in the Victorian Age (1812-1870), which was an age of inventions and discovery. The Victorian public had a fascination with anything odd, mysterious and supernatural. They were indeed captivated by stories of India, (as we see in "The Monkey's Paw), and the lands of the Far East. Hence, epic novels and stories that were about this enthralled them. Not only are the two stories similar in this factor, that is to be written in the Victorian age, but also there is an aura of fear, tension, anxiety, mystery, and an ominous, scary touch to them. We can proceed by saying that the success of the two stories advanced mainly as they must have appealed greatly to the Victorian public. One, of the most important ways in which the stories bring out their mystery and suspense is through their titles, "The Monkey's Paw" and, "The Red Room". "The Monkey's Paw", is such a mysterious title. ...read more.

It is almost as if he feels like making the main character believe in the ghost of the Red Room. The main character seems to think that the old people are quite eccentric and very ancient, that they probably made up the story of the room being haunted. Very lonely, silent and outdated people like these create tension. The author doesn't give the names of the characters like the author did in "The Monkey's paw". It creates suspicion and tension in the readers mind. When we see that we aren't given name for the three peculiar old people, we tend to lack control over them. We don't feel as if we are secure over the person and what his genuine motives are. Thus we always have a doubt in our mind created in this way and also mystery; and the author weaves tension excellently together here. There is a contrast between the characters in the story as, there a three mysterious old people and one skeptic young narrator. The old people seem to hold confidence that something is present in "The Red Room", and show disillusioning characteristics towards the narrator when he examines them. There is a secretive tone between the three people towards the young man, and we feel for some time that we are the listeners. The three old people seem to link with the sergeant major, from, "The Monkey's Paw". Hence, the characters used here develop a sense of mystery and suspense within the readers, in the two short stories', "The Red Room", and "The Monkey's Paw". As you read through the stories and reach the end of the story you feel an escalation of intense activity. ...read more.

They are other various possibilities like the wind or even weather outside, hence we aren't quite sure. But we cannot take the fact that the mutilated son of the old people could return as it is scientifically not possible for such a thing to occur. We also should consider that people who have just lost a loved one could imagine things quite out of the ordinary. Hence, also a coincidence of the "sounds" of the repeated knocks ceasing, the moment the last wish was uttered by the man. The same goes for, "The Red Room", in which the author writes, "either struck or struck myself". We do not know for sure whether or not there was something supernatural with the young man in the room. However in my opinion, it was the man's fear. The lights seemed to give him a feeling of security, and with its absence he grew anxious. We should also keep in mind that all throughout the man's struggle with himself he was in the dark, so how can we even be sure if there was anything there with him. Being panic stricken and insecure the man may have over reacted and in this case, knocked himself unconscious. I enjoyed the two stories though they are very dissimilar. "The Red Room" is written almost like a traditional ghost story, with a lot of gothic elements, while "The Monkey's Paw" was less scary. Every aspect of the two stories were brilliantly constructed and molded together and this made the stories of "The Red Room" and "The Monkey's Paw" a fantastic read, and brilliant stories of tension and suspense. ...read more.