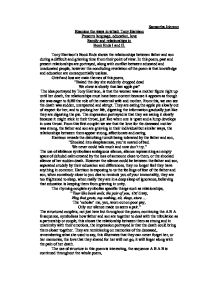 Examine the ways in which Tony Harrison Presents language, education, love Family and relationships in Book Ends I and II.

Samantha Johnson Examine the ways in which Tony Harrison Presents language, education, love Family and relationships in Book Ends I and II. Tony Harrison's Book Ends shows the relationships between father and son during a difficult and grieving time from their point of view. In this poem, past and present relationships are portrayed, along with conflict between educated and uneducated people, however the concluding revelation of the poem is that knowledge and education are consequentially useless. Grief and loss are main themes of this poem, "Baked the day she suddenly dropped dead We chew is slowly that last apple pie" The idea portrayed by Tony Harrison, is that the woman was a mother figure right up until her death, the relationships must have been content because it appears as though she was eager to fulfil the role of the maternal wife and mother. ...read more.

However the silence could be between the father and son, separated crudely by their education and differences, they no longer feel they have anything in common. Harrison is exposing to us the feelings of fear of the father and son, when somebody close to you dies to reminds you of your immortality, they are too frightened to sleep, when really they are in a deep sleep of ignorance, believing that education is keeping them from grieving in unity. The rhyming couplets symbolise specific things such as relationships, "Your like book ends, the pair of you, she'd say, Hog that grate, say nothing, sit, sleep, stare... The 'scholar' me, you, worn out on poor pay, Only our silence made us seem a pair." The structured couplets, not just here but throughout the poem, continuing the A B A B sequence, symbolises how father and son are together to deal with the tribulation as a partnership or ...read more.

and Harrison gives us the combination of order and disorder, creating the chaotic ambience to his poem which reflects the emotional turmoil that the father and son are enduring. Book Ends II is mainly about educational differences, "Come on it's not as if we're wanting verse. It's not as if we're wanting a whole sonnet!" Harrison mocks himself, he appears angry at himself that he cannot find words to suit the tombstone. Harrison is concentrating far too much on his education, and is not thinking of the real reason he is doing this, the tombstone is a sign of respect, possibly he should respect his mothers education and make the tombstone wording simple. In this poem, Tony Harrison is validating the language of the working class. When it really matters, education and knowledge are unimportant, but love and expressing your true feelings whether in sonnet or just in a few words is far more important. ...read more.