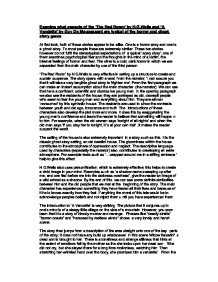 Examine what aspects of the 'The Red Room' by H.G.Wells and 'A Vendetta' by Guy De Maupassant are typical of the horror and ghost story genre

Examine what aspects of the 'The Red Room' by H.G.Wells and 'A Vendetta' by Guy De Maupassant are typical of the horror and ghost story genre At first look, both of these stories appear to be alike. One is a horror story and one is a ghost story. To most people these are extremely similar. These two stories however do not fulfil the stereotypical expectations of a typical 'scary story'; one of them examines psychological fear and the thoughts in the mind of a victim, the internal feelings of horror and fear. The other is a cold, dark horror in which we are separated from the main character by use of the third person. 'The Red Room' by H.G.Wells is very effective in setting up a structure to create and sustain suspense. The story opens with a word from the narrator, 'I can assure you that it will take a very tangible ghost story to frighten me'. From the first paragraph we can make an instant assumption about the main character (the narrator). ...read more.

The descriptive language used by characters (especially the narrator) also contributes to developing an eerie atmosphere. For example texts such as '...wrapped around me in a stifling embrace' help to give this effect. H.G.Wells also uses personification, which is extremely effective; this helps to create a vivid image in your mind. Examples such as 'a shadow came sweeping up after me, and one fled before me into the darkness overhead', give the reader an image of a wild animal as a shadow. By the end of this we can see some definite similarities between him and the old people that we met at the beginning of the story. The main character has experienced something they have feared all their lives and because of it he is knows exactly how they feel. If anything the moral of this tale would be to acknowledge peoples beliefs and not reject them until you have experienced them. The introduction to 'A Vendetta' is very striking. ...read more.

She has all the qualities of a zombie in that the character lacks emotions and her coldness is striking. 'Slowly she leaned over him, pressing her cold lips to his dead ones'. Her lips are symbolic in that most humans have warm lips as they have blood running through them, suggesting that she is dead inside. 'Day by day the old woman plotted revenge against her son's killer'. The revenge scene is very odd, I say this because it is the only scene in which she shows emotion. The emotion she shows is hard to describe, sickening is the word that first came to mind. She is excited by this horrible killing. 'That night she slept well' is the closing sentence, This suggests that her task has been fulfilled and she can die peacefully. In conclusion, both are typical of the ghost story genre in that they both have the right sort of setting. The 'Red Room' uses lots of description and personification to create psychological fear and 'A Vendetta' uses small amounts of horrific imagery in an otherwise bare and minimalist storyline to shock the reader. By Harry Metzger 11JH ...read more.