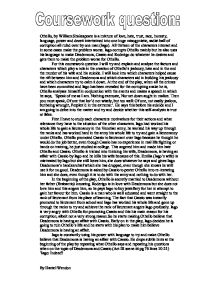 Explain and analyse the factors and characters which play a role in the creation of Othello's jealousy, hate and in the end the murder of his wife and his suicide.

Othello, by William Shakespeare is a mixture of love, hate, trust, race, honesty, language, power and deceit intertwined into one huge misogynistic, sadist ball of corruption all ruled over by one man (Iago). All thirteen of the characters interact and in some cases make the problem worse. Iago corrupts Othello mainly but he also uses his language to make Desdemona, Cassio and Roderigo do whatever he desires and gets them to make the problem worse for Othello. For this coursework question I will try and explain and analyse the factors and characters which play a role in the creation of Othello's jealousy, hate and in the end the murder of his wife and his suicide. I will look into which characters helped cause the rift between him and Desdemona and which characters aid in building his jealousy and which characters try to calm it down. At the end of the play, when all the crimes have been committed and Iago has been revealed for the corrupting snake he is, Othello analyses himself in conjunction with the events and makes a speech in which he says, 'Speak of me as I am. Nothing exenuate, Nor set down aught in malice. Then you must speak, Of one that lov'd not wisely, but too well: Of one, not easily jealous, but being wrought, Perplex'd in the extreme:'. He says this before his suicide and I am going to delve into the matter and try and decide whether this self-analysis is true or false. ...read more.

He says he is not an easily jealous man, and this is what I am here to discuss. I don't actually think that Othello was a jealous man, I think he was easily changed into a jealous man but I don't think he started the play as one. The reasons for this I will go into as I analyse his speech. In the early stages of the play Othello is happy with Desdemona and Cassio has been relieved of his position so Iago gets Cassio to ask Desdemona to plead with Othello to re-instate him, and she says: "My lord shall never rest, I'll watch him tame, and talk him out of patience"(pg. 73, lines 15-16 act 3 scene iii). Meaning that she will constantly pester him and bother him about re-instating Cassio and she will do it so much he will never sleep and he will have no patience with it because she will do it so much. Othello just disregards this for a little, which shows that he is not that quick to become jealous otherwise he would have jumped down her throat every time she mentioned his name and would have questioned her on why she wanted him re-instated every time. But on the other hand contrary to the previous point, as soon as Iago starts dropping his hints Othello starts questioning him on what he thinks of the situation as in Act 3 scene iii pg.76 lines 1-20. In this section Iago sees Desdemona and Cassio together and when Othello and Iago go to speak to them, Cassio leaves. ...read more.

The various words and images Iago has planted in Othello's mind over the course of the play are transformed into non-sense eruptions out of Othello's mouth: "Lie with her? 'Swounds, that's fulsome! Handkerchief-confessions-handkerchief" (Act4 scene I pg.98 line 13-14). These eruptions end in a random non-sense sentence of "Pish! Noses, ears, and lips!" (Act 4 scene I pg.98 line 19-20). Ultimately, Othello's inability to speak properly seems to overcome him physically, as he collapses "in a trance" (Act 4 scene I pg 98 line 19, stage direction). Although Iago is the only corrupt and venomous character in the play, Desdemona and Emilia are to blame, if only a little, because of the part they played. Desdemona can be blamed slightly for interfering with army business and trying to get Cassio reinstated, even though he had no right to be re-instated and he deserved to be ejected from the army, she kept pestering Othello, mentioning Cassio's name to him all the time, even when he was angered. Emilia caused the biggest trouble and made the biggest mistake in the play by giving Iago, Desdemona's handkercheif even though she knew he would use it to cause trouble. In conclusion I think that Othello is not a jealous man but he was quite quick to become jealous and his jealously also got very out of hand in the killing of his wife. I think his jealousy was goaded on, not just by Iago and he had no controll over himself after a certain period of time was not responsible for his actions and were it not for the sadist snake Iago, none of Othello's jealousy would have been created. ?? ?? ?? ?? By Daniel Wendon ...read more.